I just wanted to let you now that I did see the question and I actually already wrote and drew a response for it, but as I was piecing my section together I decided that it wouldn't fit with December's theme. I will definitely be including it in January, though, sorry for the wait! - Hypnotoad (T|C)

For userboxes some basic coding can be found here. Obviously change the variables like text and pictures to match what you want. For it to look nice on your userpage before you put the coding put {{userboxtop}} and end with {{userboxbottom}}. If I haven't explained well enough, feel free to view source on my user page and copy and paste, changing what you want. Yoshi876 (talk)

Congrats! With the releasing of the next issue of the 'Shroom, you wills get a shout-out, as well as get presented a virtual medal. Andymii (talk) 16:56, 25 February 2015 (EST)

Congratulations from the 'Shroom team![edit] 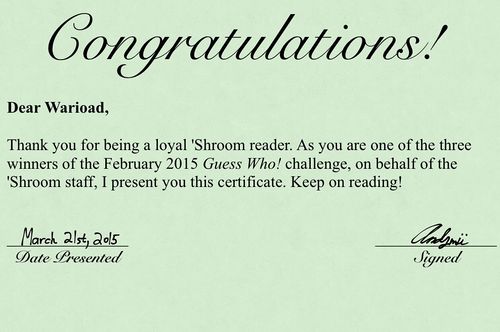 My sincerest apologies, I must've read the article wrong whilst I was preparing the quiz. Thank you for bringing that to my attention. Yoshi876 (talk)

The changes that I reverted. Hello, I'm Time Turner.