A sub-page for my works-in-progress, mostly new proposal ideas and their related "mainspace" content. As always, please feel free to send me feedback.

At the Super Mario Wiki, Featured Images are those quality, intriguing, witty, provocative, rare, important, and otherwise simply interesting images that can be found throughout the site's articles. Users are encouraged to submit and vote on nominations for the Featured Image displayed on the Main Page. Every a week, a new image is selected to be featured. This is done by subtracting the number of oppose votes from the number of support votes in each nomination - the image with the most "points" at the end of the week will be featured. Any image with a negative amount of points at the end of a week (that is a nomination with a majority of opposes) is removed from the selection process. The only condition for nominated images is that they must be in an actual mainspace article on the wiki. No personal images or images from non-mainspace pages are allowed. New image nominations can be added to the Featured Image Nominations section below. 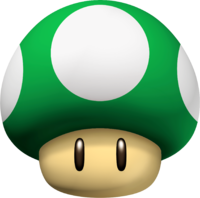 Subject: Main subject of image; include a link to the article it is included in. (Example: 1-Up Mushroom)
Nominated by: If you nominate the image, place your name here.

Place some comments here if you want to explain why you think this image should or should not be featured.

This piece of promotional artwork is fun, high-quality, and big! The multiple Mario Brothers make this image really fascinating. =) -- Son of Suns (talk)