Silver777 is a User of Super Mario Wiki, residing in the Middle East. She is also known as silverlunar777 on other websites. Silver is a Fan of the Mario RPGs (the Paper Mario and Mario & Luigi series) and Mario Kart Series and has played nearly every title of them (exceptions being Mario RPG: Legend of the seven stars) and played every title of the Mario Kart series (except 46 and Double Dash!!).

Beside the Mario Series, Her most favorite Nintedo series that she enjoys playing the most are the Kirby and Fire Emblem series.

Silver777 favorite game genre is RPGs, she has finished every RPG game that she gets her hands on. She doesn't like American RPGs, however.

Silver777 is in possession of a NES, SNES, PlayStation, PlayStation 2, GameBoy, GameBoy Color, GameBoy Advance and a Nintendo DS. It is unknown whether she will buy a Wii or not. 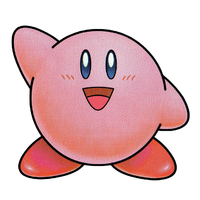 Kirby is her most favorite Nintendo character.

Silver's most favorite Nintedo character of all time is Kirby, She was awed by his colorful and magical world that is full of Imagination. She will always be grateful to Masahiro Sakurai for creating such a simple yet excellent character. Isn't he so cute?

File:MarthBrawl.jpg
Marth is one of her favorite Lords alongside Eliwood

Silver is a big fan of the Fire Emblem series, drawn by it is epic storylines and Great character developement compared to other Nintedo series. It always have that epic feel when playing any game of the series, makes anyone have that sense of victory after finishing a chapter or the game in general. It's amazingly fun, if a little frustrating.

The SNES is Silver's most favorite console of all time, she also thinks that it IS the best console ever for it is amazing collection of great games and RPGs.

Silver is a regular in the Kirby Rainbow Resort Oekaki boards, if you want to contact her, you will be guaranteed to find her there, she is called silverlunar777 at the Oekaki Forum and FanArt gallery and SilverLunar at the comment section on the main site. http://www.disktech.net/kaki/ http://kirby.classicgaming.gamespy.com/index2.html