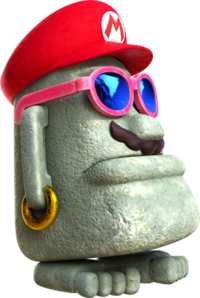 Moe-st sincere apologies in advance for any edits made without logging in. The warm temperatures in this cli-Moe-te sometimes give me, Moses the Moe-Eye, heatstroke, and I become forgetful in my delirium. Thankfully, I've been told that I have some kind of distinctive speech pattern which helps to distinguish me even when I write anony-Moe-sly! I'm thankful for this Moe-thod of recognition, though I have Moe idea what dialect they mean...

Journal entry - June 13, 2017 It is I, Moses the Moe-Eye. I am but a humble head, born in the hot and sandy kingdom of Tostarena. Up until a few years ago, I lived a normal, Moe-notonous life... I waddled around, occasionally took off my shades, and watered my saguaros. But one day, a Moe-mentous experience occured, which changed my life forever. All of a sudden, a pudgy Moe-stachioed man clad in red fell from the sky! I was startled, and tried to flee, but he threw his hat at me... and something almost indescribable happened. He entered me! I know, I must sound crazy, but something happened in that second. He took over my mind and body! He walked me around and wore my shades. He even took me up to the pillars, which are forbidden to us Moe-Eyes. There, he used me to grab coins and a moon-shaped tile... and all at once left me, jumping out of my body, off of the pillar, and onto the sand. I was conscious the whole time. Moe-st other Moe-Eyes would have been petrified with fear, but I was exhilarated! I had always been a boulder Moe-Eye than my friends, and the experience sent a surge of excitement through me! Now, I have devoted my life to discovering the secrets and Moe-steries of this wonderful pheno-Moe-non known as "capture". I hope my research is of use to you citizens of kingdoms far and wide. Someday, I too hope to travel the world and have my own adventures. But, until then, I sit here on the sand, and dream.

And tend to my cactus garden when I have some spare time.

Journal entry - October 27, 2017 In all my wildest dreams, I never could have i-Moe-gined that I would ever travel outside of my humble habitat. Many, many, years, had I remained is-Moe-lated in the deserts of Tostarena, wall-Moe-wing in an uneventful, Moe-dinary life. Of course, the event which took place al-Moe-st five Moe-nths ago now brought new meaning to my life - giving me a purpose, a calling, a Moe-tivation. But even then, I never would’ve guessed I would ever lay eyes on another kingdom... let al-Moe-ne the whole planet! Today started out Moe-mally, you see... a few Moe hours researching, fertilizing my astrophytum, and a good-natured stroll about the pillars. But as night began to fall and Moe-nbeams dappled the sand, a gigantic airship appeared on the horizon! Before I could even recognize it as the same ship which had been floating over the Inverted Pyramid the day the Moe-stachioed man came through, a hu-Moe-ngous Moe-nster grabbed me and pulled me aboard! It was like a blur, but I re-Moe-member that I was the first “passenger” on the ship... and by Moe-rning, many different creatures of all shapes, colors and sizes were my fellow hostages! The airship then took a turn, and flew right through the at-Moe-sphere! Up to the moon we soared - a word I only learned by hearing the other passenger’s remarks - and then disaster struck. I was standing on the ship next to a rotund seal and a rusted yellow robot. Our combined weight was more than the ship’s port side could bear, and I fell! I re-Moe-mber plum-Moe-ting to the surface of the moon, rolling towards a gaping cave... and then everything went black. When I woke up, I was on a solitary platform in the Moe-dle of a sea of Moe-lten magma. So here I am, again, stuck... but I somehow have the feeling everything’s going to be alright.

And it looks like I see some blue overalls in the distance now.