“Did somebody page the King of AWESOME!?!?”
—Bowser, Mario & Luigi: Bowser's Inside Story

CoolBowserGuy, sometimes known as BowserGuy, is the main antagonist of the Mario Wiki. He is the highest level Henchman in Bowsers army. He has repeatedly helped Bowser kidnap Princess Peach, though doing it behind the scenes. He has been an ally of Bowser since he tried to take over the galaxy.

He has also secretly put together all of the Mario sports events, but of course, didn't even get put in the credits. His mortal enemy is of course, Mario. His life mission is to ban Mario from the wiki, but of course, he can't. This is because Porplemontage, the creator of the wiki, is secretly Mario in disguise. So that wouldn't turn out good.

Instead of telling you how I was created, which would be too gross for this wiki, I am instead going to tell you about Bowser.

Bowser was originally, in no offense, an ox. Shigeru Myamoto (however you spell his name) created him, nameing him Kuppa, which in reality, is a Korean dish. In the U.S., they called him Koopa, later naming him Bowser.

Ever since Super Mario Bros, he has wanted to kidnap Peach. He originally wanted to because only she could break his black magic spell. But, later on, it became a hobby, and he started doing it for fun.

That is how Bowser came to be, and why he does what he does.

CoolBowserGuy first joined the Mario Wiki in March 2015. He has always loved Super Mario games, and he knew that he must make an account. He looked, and there weren't much people named after Bowser. So he decided to pay his homage, and name himself after the greatest video game character of all time. This is the story of how CoolBowserGuy came to the Super Mario Wiki.

On Thursday, April 23, 2015, CoolBowserGuy reached 100 edits on the Super Mario Wiki. What an awesome achievement!! (Eh, Not really).

CoolBowserGuy hopes to one day become a patroller of the Wiki, and maybe even an Admidistrator. And one day, when CoolBowserGuy gains more experience, he hopes to work for The 'Shroom. These are all achievements that CoolBowserGuy wants to achieve. (Is it weird that I keep referring to myself in the Third Person?)

CoolBowserGuy's personality is really the same of that of Bowser's. He is rude, obnoxious, loud, scary, smelly, and he hates Mario. So yeah, just like Bowser. (Sorry, Bowser). 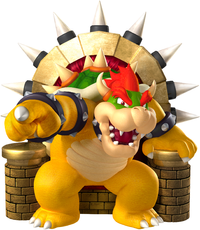 Me in real life.

Well, I can breathe fire, suck enemies into my body, crash through walls, and do anything Bowser can do. Why are you exactly like Bowser you ask, well I'm not exactly like Bowser, I about up to the top of his shell. He says when he retires, I will become leader of the Koopa Troop. Which is AWESOME!

Like I said in the last section, up to the top of Bowser's shell. You seriously didn't read that??

Here's all the people I know and close to:

Okay, who would play me except for me. I mean seriously, I wasn't featured in any of the video games, even though I totally needed to be. Its like "You're not Bowser, so we can't put you in the FREAKING GAME". And now you're asking who I am portrayed by????!!!! That question is totally stupid. Like I said, I didn't even get the stupid credit. (Am I rambling/ranting?)

Every game since Super Mario Galaxy. Though like I said, in the background. This means I plan what Bowser actually does, and gets NO CREDIT WHATSOEVER!! I mean seriously people, who's more important, the man who thinks of Bowser's plans, or the person who carries out those plans, basically the big lug (ahem..Bowser). So yeah, since Super Mario Galaxy, I have been in every game. *sniffle* I didn't even get to party with them*sniffle*