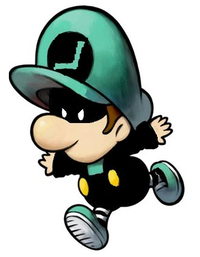 Baby L is the evil hypnotized version of Baby Luigi. He can not say the L and the R, so he talks like "I am miftew ew!!". He crawls around and he has a very high attack power. His best attack is crying. If he cries the level floodes and you'll lose HP when swimming in tears. In Chapter 10-3 he pulled a very dirty trick on the Heroes. He dressed himself as the original Baby Luigi and told the Heroes that he wanted to join them, and when he was in the team he tried to get information for himself. Unlike normal Mr. L, Baby L has nothing to do with Count Bleck or Nastasia.

Baby L is seen to be very evil(I am the ewil miftew ew!) and he constantly tries to kill people by crying. He is very powerful which is a great power to him while he kills people. He tries to be really annoying. He seems to be very smart because of the trick he pulled on the Heroes. He also constructs his own Mecha robot called Bwobot.