From the Super Mario Wiki, the Mario encyclopedia
< The 'Shroom:Issue XVIII
Jump to navigationJump to search 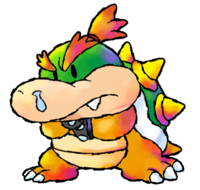 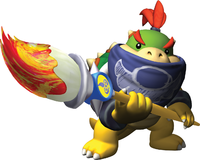 Sorry that I ditched y’all could not write a section for July’s issue, due to a family trip. I’m back now. Anyway, father against son. I thought it would be fun to do this. Also, I might not follow the exact same categories each comparison, so don’t sue me. Here we go, the runny-nosed guy, and the masked dude.

Baby Bowser, as you can see, carries many of Bowser’s simple characteristics(well, duh). Spiky shell, tannish stomach, overall yellowish body, red hair, black bands on his arms, all that stuff. In Yoshi’s Island, he has a runny nose, which, in Japan, represents, well, a “fool”? I can’t think of the right word, but he’s just a little out of it. So, somewhat like Bowser, Baby Bowser is not the smartest turtle out there. And now let’s look at Bowser Jr.

Okay what’s this guy have? Spiky shell, red hair, yellow body, tannish belly, black bands, green head… wait… WHAT THE HECK? What’s going on? They’re the exact same!! I mean, just compare the two images below. See what I mean? Who knew the Mushroom Kingdom had cloning technology? Bowser cloned himself to make his son look exactly like him! How creepy. Anyway, gamers usually don’t go far into that kind of stuff(But I do. Like, who’s Jr.’s mother? According to Bowser in SMS, it’s Peach. It’s no wonder Mario switched off to Rosalina in the next game! :p). But yeah, on the outside, they’re pretty much equal. Not much to compare (Or rather too much).

Baby Bowser has appeared in three games as a boss. His first being Yoshi's Island, the second Yoshi's Story, and then Mario & Luigi: Partners in Time. The thing about Baby Bowser is that you can only see him in the games about the past. PiT is a special case, but normally you can’t see Adult Mario and Baby Bowser in the same game; which might be why they came up with such a similar character, Bowser Jr., to replace Baby Bowser. To recreate those battles, but this time with Mario, not Baby Mario.

This guy definitely has more appearance in games, because, as mentioned, he lives in “the present”. Debuting in Super Mario Sunshine, he’s appeared in New Super Mario Bros., Super Mario Galaxy, and is sure to appear in more platformers. Another is that he is in nearly any of the newer Mario sport spin-offs. Baby Bowser, unfortunately, can’t do that, because of the time (But wait… yeah they can! Why are Baby Mario and Mario in the same sport games? Are they different people?). Bowser Jr. has never been seen as a main boss, however, because where there’s smoke, there’s fire – meaning Bowser.

Relationships with other Characters

Baby Bowser, as able to be seen in the games he’s been in, seems spoiled. He usually gets everything he wants, making Kamek do errands, all for the good of himself. It looks like he works alone, with not many friends; though he has minions. He rules Bowser’s Castle, though it is unknown why he, as a baby, is the king. Since there doesn’t seem to be any kind of “father” Bowser, I guess the little one gathered minions on his own.

In contrary to the leader-type Baby Bowser, Jr. seems more attached to his father, Bowser. He is seen at the end of sunshine, calling Bowser “Dad”(if my memory is correct), and Bowser calling him “Son”. Besides that, not many connections can be made between Jr. and others. He definitely has a rivalry relationship with the Mario Bros., and maybe respect for Peach, as Bowser told him was his “mother”. According to Jr., he was not kidnapping peach, but rescuing her. So it’s more of Bowser’s fault than Jr. himself. He might be better-hearted than we might think.

Wow, this one was hard(unlike last time, lol) to decide between! Yeah, but as I said the first time(and will probably say every time), don’t come to my talk page and say “The other one should have won! You suck!” or something like that. Take your stress management somewhere else(try newuserpedia Grin). Click “Show” to find out who the lucky winner is!

BABY BOWSER – I think he’s worthy, mostly because of his character. He’s always trying to get the benefit, whether that means snatching it away from someone! Lying, tricking, these behaviors later lead to evil, and grew up to be Bowser! I still think Bowser Jr. is a nicer guy. But Baby Bowser is stupid, evil, and funny. What more could you ask for?