From the Super Mario Wiki, the Mario encyclopedia
< The 'Shroom:Issue LXXXIII
Jump to navigationJump to search

Are ya ready for some Video Game History?! Pay attention, because you will be quizzed at the end, and your answers had better not be as pitiful as the Kremlings' sums on the chalkboard at Wrinkly's class way back when! Just kidding, you don't get graded, as my class is not for credits, you voluntarily show up month after month to be entertained, to learn about a topic you love, and have fun. This month's lesson is about the greatest concert that you never knew happened (most likely).

The Greatest Concert You Never Knew About

Koji Kondo attended and performed at the concert and composed much of the songs performed there.

The greatest concert that you never knew about took place in Japan over a decade ago. If you or anyone you know has ever been to Japan, this would have been a hell of a time to visit. On September 14th, 2003, Nintendo featured Mario & Zelda Band Live. The performances included country, Latin, and big-bang arrangements of tunes from Miyamoto's iconic games. And what a star-studded event that night was for fans of the Big N! A manga artist named Benimaru Itoh played a bad-ass Super Mario Bros. theme on acoustic guitar, and was joined by none other than Koji Kondo and Shigeru Miyamoto, who played the Donkey Kong theme onstage with a guitar. Afterward, a vocal theme song from The Legend of Zelda series, with lyrics written by Miyamoto himself, was performed. Other Mario tunes, or variations thereof, which were performed that night, were the Opening of SMB, the Overworld Theme of Super Mario 64, a Mario Scat Version of Super Mario Sunshine, The Go! Go! Mario tune, SMB3 Ending Theme, Athletic Theme of Yoshi's Island, Yoshis on the Beach from Yoshi's Story, and the Ending Theme from Mario Sunshine. Many Zelda-derived tunes also played.

CDs are Sold of the Concert 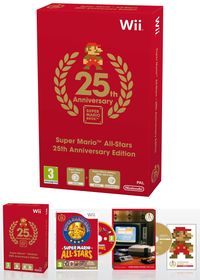 The Super Mario All-Stars Limited Edition was packaged with a CD featuring Mario Music from all of Mario's history.

A CD and DVD video of the concert was later released. And no, they were not given away as special-edition prizes as in a mail-away contest, or included free inside of game magazines. No, they were actually sold, and at premium prices, in every major Japanese CD store. Game Music in Japan is a phenomenon in and of itself. CD releases of video game soundtracks are hugely popular there, AND NOT ONLY WITH VIDEO GAME FANS (!). Yes, some such releases have even attained mainstream popularity. Live recordings of game music concerts, such as the one I have described, are recurrent best sellers! Thanks for being with me this month.