Hello, I’m Toad85 again. And here’s another issue of “A History of Video Games”. Again.

I’ve been talking about the dominant company a lot regarding this article. My first article was about Atari, and then I did an arc on Nintendo, both of whom were dominant forces of video gaming. But what I haven’t really done was discuss the opposition. OK, I’ll admit I did do an issue about Universal City Studios and Nintendo’s dispute in 1982, and I said a little bit about Activision (whom Atari hated with the intensity of 1,000 suns) in my ’83 crash articles. But these guys weren’t real competition for Atari and the big N; Universal and Activision didn’t have the same goals, drives, and product as the first party manufacturers, they just acted as roadblocks of sorts.

No, I want a company that can contest toe-to-toe with plumbers and Pong. One that seriously attempted to overthrow the two as the uncontested masters of the living room, and actually succeeded for a while. One that is now known by heart by gamers from around the world, and beloved by so many. One that is bankrupt as of 2011.

I’m talking about the big block letters and screaming background entities that screeched into your soul. I’m talking about blast processing, supersonic speeds, and simians in miniature spheres. This is the company called Sega.

Sega began, actually, had its roots as an American company in 1940. Then called Standard Games, owner Marty Bromley oversaw the creation of coin-operated slot machines for soldiers in Hawaii. After Pearl Harbor a year later, demand for amusement unsurprisingly went up, and Bromley became rich off the revenue generated by Hawaiian gambling. After the World War, when the United States barred slot machines, Bromley took his business over to the rebuilding Japan. He rebuilt Standard Games into an importing business, where he would bring his old American slot machines and resell them within the archipelago. “Standard Games” was renamed “Service Games” in 1952.

Bromley and Rosen crossed paths in 1964, and Service Games merged with Rosen’s company to form SEGA (short for Service Games) Enterprises, Ltd. Although it was technically a buyout of Rosen’s company by Service Games, Rosen assumed the role of CEO of the new company. Through the 60’s and 70’s, Sega established itself as one of Japan’s premier arcade game manufacturers.

Of course, video games took off in the late 70’s, so Sega was pushed to make a decision: move to electronic video game cabinets or risk losing a lot of money. Is it really a big surprise that they bought a distribution company run by Hayao Nakayama, and developed Head On, a maze video game before Pac-Man made it cool, in 1979? 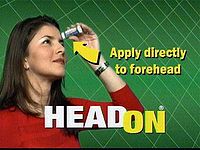 Sega, finding a new niche in which to grow, began doing so. Quickly. After the relative success of Head On, Sega began trying bigger and better projects, including several attempts at making a 3D game. A flight simulator called SubRoc 3D was the first of its kind, giving a stereoscopic perspective via an advanced first-person camera. Turbo was the first racing game to use full-color sprites. Later, a Buck Rogers licensed game trumped any graphics gamers had ever seen before. Sega, behind the first-party producers, was one of the top developers of the time.

Then came the ’83 crash. I won’t bore you to death on this, since I’ve already done that in a previous article, but Sega lost a lot of money. Note, however, that the crash in Japan was a lot different than the crash over here in the West. Here, consoles almost went extinct, but arcades soldiered on. In Japan, it was the opposite: arcades were tossed aside in favor of the home market. Sega decided that, in order to keep their relevancy, a Sega console must be made.

Enter the SG-1000. Sega’s answer to Nintendo’s Famicom, which, ironically, was released on the same day, the SG-100 was a primitive (even for that era!) box that played ROM cartridges or Cassette tapes. Not surprisingly in the face of the much more powerful Famicom, as well as due to a significant lack of great original games, the SG-1000 was a critical and economic flop.

After the SG-1000’s failure, Sega had a corporate shake-up. Owner Gulf and Western (I think I forgot to mention before that they bought Sega in 1966) sold the gaming company back to Rosen. Rosen named Nakayama the new CEO. Sega would now focus solely on video games.

While the SG-1000 was a failure in every sense of the word, it did give Sega valuable information on how not to make a successful console. Additionally, several top designers going forward were hired to work on the ill-fated console, so it had a large creative lineup to work with. Batting cleanup was Yuji Naka, who had co-created an action-adventure dating sim called Girl’s Garden. Other top devs were Yu Suzuki, who had coded Champion Boxing, and Reiko Kodama, who designed quite a few of the SG-1000’s high-profile games.

Sega made a second attempt at the video game market with a console-computer named the SC-3000…which also failed for the most part, but surprisingly was a hit in New Zealand. So it was a start.

But success as a computer company wasn’t what Rosen wanted. To truly make Sega become the biggest name in the video game industry, he’d have to go toe to toe with the Famicom with a powerful new console. In October 1985, Sega released the SG-1000 Mark III (don’t ask me where Mark II went, maybe New Zealanders bought ‘em all) in Japan, just as Nintendo was planning to export the NES. But, again, Sega failed to capture the hearts and minds of its home and native land. Sega realized that if the NES was a hit in America, Nintendo would have a stranglehold of two markets instead of one. Sega basically gave up on the Land of the Rising Sun, and set forth to conquer the Land of Reagan.

Finally, the timing was right for a success. Sega was well-known amongst the American gaming crowd, thanks to the Blue Text’s arcade diversions. In the U.S.A., Sega was known for churning out solid titles and activating cutting-edge innovation. Games like Hang On and Space Harrier stretched the limits of their hardware, and were fun to play to boot. Sega hoped that their arcade reputation would lead to living room success.

In 1986, Sega rechristened the SG-1000 Mark III as the “Sega Master System”, made a few aesthetic alterations, and shipped ‘em to the States. To complement the new gaming system, Sega crafted an unofficial mascot to battle the likes of Mario and co.: Alex Kidd. Kidd is a short, elfish orphan boy in a red and yellow jumpsuit who lives alone on a mountain called Mt. Eternal, in Miracle World. He somehow learned the ability to punch through solid brick. When an evil guy named Janken the Great attempts to take over Miracle World in the game, Kidd must use his unique abilities to rescue the kidnapped Prince Egle and Princess Lora. The game, Alex Kidd in Miracle World, was primarily a 2D platformer, but had several RPG elements. 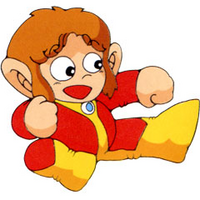 This is what you would get if you crossed Bruce Lee and Frodo.

A powerful new console, coupled with a quirky platformer, Sega realized that they had a potential hit on their hands. But they couldn’t just rely on Kidd to carry the system. Nintendo had great first and third-party support, with strong titles like Excitebike, Ghosts ‘n Goblins, and Kung Fu to back up their plumber. So Sega and their third-party friends developed their own: Afterburner, Black Belt, and Super Tennis were some of the most notable Master System exclusives.

However, like their previous efforts, the Master System was doomed to fail. This was for several reasons. First, the NES had already taken hold of much of the U.S., and the Master System didn’t have the same gimmicks and enticing stuff to attract as many gamers as Nintendo’s toaster could. The Master System’s late arrival also meant that there were fewer companies keen to develop games for them, thanks to Nintendo’s “only make games for us” policy. Second, Sega hired Tonka, a toy manufacturer, to market the console. Tonka had no knowledge of electronics, and their attempts at marketing were as horrific as the Houston Astros. Third, and perhaps most importantly, the Master System came with no pack-in title. While the NES had Super Mario Bros. and Duck Hunt, Sega’s make-or-break game Alex Kidd didn’t come with the console. Sega wanted to derive a profit from their mascot, but it bit them in the arse later on. By 1989, the Mark III pulled out of Japan once and for all, and did the same for America in 1991.

However, unlike before, the Master System wasn’t a complete failure. It was widely popular in PAL regions like Germany, Brazil, and (you guessed it) New Zealand. Several Master System games would go on to fame and fortune, including Wonder Boy, Fantasy Zone, and Alex Kidd himself. The Master System, while not successful in the U.S., still allowed Sega’s name to become known and adored by many a fan, and this brand loyalty would be essential for Sega’s next attempts to take down the big N.

This article is enigmatic end.

Before I go, I’d like to thank Legend of Lily (talk) for making that cool banner at the top of the page. Thanks to the undisclosed sources that I used in creating this article. Thanks to the people of New Zealand for being so New Zealand-ish. Also thanks to the reader for, well, reading. You’re awesome.

I’m Toad85, your resident gaming historian, and that’s the way it was.