by Post-Damage Invincibility (talk)
Warning – This section contains harsh language. If you are offended by such materials, we recommend that you skip this section.

It's a Battle Royale of clouds this month in the Glitz Pit. Fwoosh versus Foo versus Ruff Puffs versus Cyrrus. And the winner faces a surprise challenger. 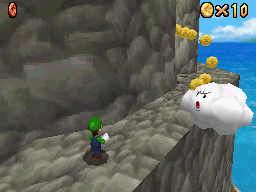 Fwoosh can actually blow Mario off of Tall Tall Mountain, but he can't move Wario. But Wario was no problem for Fwoosh in the original N64 classic because he wasn't in it, let alone Luigi. The Fwoosh is more menacing and is a much bigger threat than Foo. Foo blows fog that merely blocks part of the screen, much like Bloopers and their ink in the Mario Kart franchise. And plus, they can be defeated. All Mario has to do is spin to clear a lot of the fog. Therefore, Foo is easily defeated, although he is pleasant to look at. 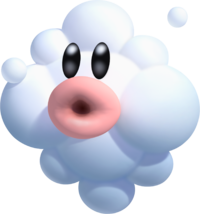 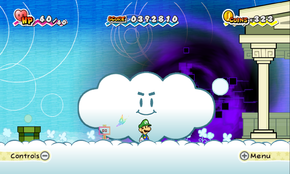 Cyrrus is no match for a Ruff Puff. He cannot move, and with the Ruff Puff's aggressive, powerful head bonks and electrical attacks, he is a sitting duck. Until he secretly eats a Red Apple and grows to massive proportions, catching Ruff Puff off guard. The Ruff Puff is unexpectedly crushed, and beaten. However, Cyrrus still cannot move beyond what he has just expanded. So when it comes time to fight Fwoosh, Fwoosh keeps his distance and blows at Cyrrus until he is reduced to nothing.

Cloud N. Candy: Foo was poo, and you Fwoosh, are a douche. I will defeat you, and dress you in ruche. You're no Yoshi, so you can't eat me. For you can't suck, you can only blow. Your cloudy mass I'll chuck, and destroy pronto.

Fwoosh: You're a joke as a boss! You lost to baby Yoshi! Face it, you've already lost! I'll save a piece of you as a trophy! I'll blow you apart just like I did Cyrrus. I'll scatter your DNA like a retrovirus! At least I've killed a gamer or two, as an enemy there is no one lamer than you!

For the first time ever, I'll let You decide. PM me on the forums (Our forums, which one did you think?!) and tell me who you think won based on the rap battle, and I'll count it as one vote. Then, I'll declare the winner next month based on the character you picked! Have a Merry Christmas, and don't forget to check out my comic.