“For my part, I consider that it will be found much better by all parties to leave the past to history, especially as I propose to write that history myself.”
—Sir Winston Churchill, former Prime Minister of the United Kingdom

Hello everybody. I would like to once again welcome you to another issue of the ’Shroom, and another “A History of Video Games” article. I am your host, Toad85.

We shall now return to the year 1985. As you all know, the console market in the United States was pretty much dead, thanks to the Video Game Crash of 1983. Atari was in the red, Mattel and Coleco had already evacuated the industry, and game developers were disbanding one by one. It was pretty dismal, especially considering how the video game market had previously been one of the fastest growing in the United States. Gamers began to do things other than play Atari or Intellivision; for example, there was this newfangled craze called “reading”.

But in Japan, game companies were alive and well. Granted, the Crash had taken its toll on the console aspect of the industry (there were no Japanese console manufacturers at the time), but Japanese kids kept on pushing their yen into arcade machines and handhelds. And what company was at the center of Japan’s market?

This, my eighth ‘Shroom article, is about Nintendo’s foray into the worldwide console market. Namely, the Nintendo Entertainment System.

As I’ve said I don’t know how many times, 1983 was not a good year to be a game developer or console creator in the US. But, as I just said above, it was a good time to be one in Japan. And Nintendo was the front-runner, off of the successes of Donkey Kong and the Game & Watch.

I will now briefly talk about the Game & Watch, partly because I feel like going off on a tangent and also because it’s better to explain now than never. Game & Watches were small LCD-screen portable games produced by Nintendo shortly before Donkey Kong hit it big. Each individual device held its own game; if you wanted to play another Game & Watch game, you had to buy a whole ‘nother system. Luckily, they were pretty cheap, so it’s not quite analogous to having to buy a frigging new 3DS every time you wanted to switch from Super Mario 3D Land to Star Fox 64 3D. That would be just plain annoying. Still, it’s interesting to think that Nintendo was in the portable game market before the console market.

But by far their biggest success was ironically released the same year the industry in the States crashed. The Family Computer, often referred to as the “FamiCom,” was not only received extremely well by reviewers, it sold millions and millions of units. Critics loved the extremely advanced graphics and innovative d-pad, but by far the FamiCom’s greatest asset was its game library. Sporting such classics like Donkey Kong, Excitebike, and Mario Bros., the FamiCom captured Japan’s imagination. After two years of watching FamiCom boxes move off of store shelves in Japan, Nintendo decided the time was ripe to introduce its masterpiece of a console to the world.

The Family Computer, also known as the FamiCom.

Nintendo’s salespeople obviously had its work cut out for them. Any sane person would consider an attempt to bring a game console from Japan over to the United States, where the last thing on anyone’s mind was gaming thanks to Atari’s foolishness, an illogical and fatal move. But Nintendo ignored logic and pressed on. Nintendo was determined that their console would be loved by gamers around the world, especially in the Crash-stricken USA, and pressed on.

But while Nintendo desperately wanted to sell the FamiCom in the USA, they were sane enough to realize that trying to market a game system in the Americas would lead to blank stares from consumers. The solution? Market the FamiCom as an entertainment system; as a personal computer, not a console.

The NES that never was.

Nintendo’s first draft for the international FamiCom was unveiled in 1984, and was dubbed the “Advanced Video System,” or as I call it, the “Aivsuh”. The Aivsuh was designed by Nintendo employee Lance Barr, and was to be seen as a full-on computer. Not only did it have wireless controllers, it sported a keyboard, zapper gun, cassette player, and even a piano keyboard. No, I’m serious; the Aivsuh almost had gamers playing piano. The Aivsuh dropped the Famicom’s family-friendly Pokèball color scheme and went with a futuristic grey look. Needless to say, all these surplus gadgets, plus the many structural similarities to systems like the Intellivision and Atari 5200, no doubt turned retailers off, as evidenced by the fact that none bought any. Barr went back to the drawing board and started working on Plan B.

President of Nintendo of America Minoru Arakawa sent Barr a new design for the American FamiCom. Arakawa decided to keep the “entertainment system” idea, but instead of marketing the FamiCom as a high-end computer, they would take the toy route. The FamiCom, now dubbed the “Nintendo Entertainment System”, would now be a drab rectangular box designed by Barr in just one hour. The controllers would once again be wired, but could be removed from the system. Both keyboards were dropped, as well as the cassette player, but the zapper gun remained. The major selling point this time around was this little bro:

This little something to my left is called a “Robotic Operating Buddy” or “R.O.B.” for short. The idea was that R.O.B. would be advertised as the central piece of the NES; the top toy in the box. The petite plastic pal could, put plainly, play with you. No, it seriously could; if you owned either Gyromite or Stack Up, R.O.B. can assist you during gameplay by messing with the little circular blocks seen in the picture. It was a pretty innovative concept, and it’s unlikely to be repeated.

Another thing that set the NES apart from older systems like the Atari 2600 and the Colecovision developed with the controller. See, a staple of video game consoles and arcade games before the NES was the joystick. The joystick was pretty much the representation of a video game’s controls; move the joystick, move the playable character around. The NES, though featured something that we today call a d-pad. While fairly common in Japan, these buttons had never been seen before in America. Not only did this help the NES lose any sort of connection to consoles of the past, it presented gamers with a new challenge. To master a game, you now had to master the d-pad. It was a bizarre, clumsy, yet strangely comfortable way to play when it first came on the scene.

As a final move, Nintendo of America proposed a distribution deal with Atari. Nintendo’s idea was that, since Atari was a household name and knew how to move boxes, the NES would get a quicker start via a partnership with them. However, Atari turned down the offer at the last minute, after seeing Coleco demonstrate a port of Donkey Kong for the ColecoVision. Atari believed that Nintendo was also in cahoots with Coleco (which they were not), and didn’t want to deal with a third party.

Nintendo decided to go it alone, and test-drive the NES in the New York area. President of Nintendo Hiroshi Yamauchi resolved that if the NES could succeed in such a large and varied metropolitan area, it could succeed anywhere. If it was a flop, then no export for you.

In order to attract retailers for their New York experiment, Nintendo offered a win-win situation: if the NES was a success, the retailers would get gobs of money and wouldn’t have to pay Nintendo back until the end of the year. If it was a flop, like the experts predicted, then Nintendo would buy back any NES’s that remained unsold. By October 18, 1985, Nintendo had attracted about 500 retailers in the New York area. This includes world-famous toy store FAO Schwartz, land of the floor piano. The original shipment consisted of 50,000 NES consoles.

The public was wary of the NES, as was predicted, but the system’s toyish appearance and strong lineup of games convinced many parents to buy. In fact, one of the pack-in titles was a now-well-known title created by the great Shigeru Miyamoto himself: a sequel to the popular arcade title, Mario Bros., entitled Super Mario Bros. The game was bright and cheery, and with so many old Atari and Intellivision gamers not used to full side-scrolling, it was pretty revolutionary as well. No doubt this pack-in game convinced a lot of consumers to purchase the NES. 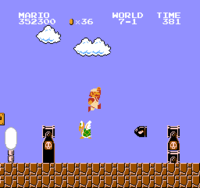 Nintendo wasn’t able to sell all of their consoles, but did well enough to keep pushing the U.S. market. In early 1986, Nintendo came to the Los Angeles market, and then Chicago, and then San Francisco, and by the end of the year, the NES had gone nationwide. NES’s were flying off the shelves, several games had already sold a million units, and had taken a nation by storm. By 1987, 5,400,000 units had sold.

Of course some companies, like Tengen and Wisdom Tree, attempted to bypass Nintendo’s rules, but for the most part developers acquiesced to Nintendo’s rules. Designers like Konami and Capcom were given Nintendo’s “stamp of approval” for their games.

By 1988, Nintendo had sold 9.4 million NES’s, and was becoming a dominant force in the marketplace. In fact, it was the dominant force; with Mattel gone, Atari failing every time they do anything and Sega still relatively obscure, Nintendo almost had a monopoly. But that didn’t mean they had no competition. Sega’s Master System still sold reasonably well, and Tengen unsuccessfully attempted to sue Nintendo about Nintendo’s lockout chip after they grew bored of making games for the 7800. In 1990, Nintendo sued a small company named Comerica over their nifty little invention: the Game Genie. Again, though, the small company won. Still, though, Nintendo found 90% of the gaming market by the end of the decade.

OK, that’s enough writing for this month. Tune in next time where we’ll discuss the history of some of the NES’s more famous games and third-party companies. I’ll be taking suggestions if you want me to confer about a particular NES-era game or company; just PM me on the Forums. I’ll try to find as much as I can about your requested game; plus I have some I’ll do without prompting.

Also congrats to me for writing my longest article yet. According to Word, I have 1,938 words and 9,572 characters.

I’m Toad85, your local video game historian, and that’s the way it was.