by Xpike (talk)
Warning – This section contains harsh language. If you are offended by such materials, we recommend that you skip this section.

Well, for this review I am now officially part of the 'Shroom's staff, so I guess you can expect at least 2 gaming reviews that are not about Mario each month. However, if anyone else who isn't a complete Mario fanboy and actually plays games that aren't about them and would like to apply for another review position should try it, since having more reviews will make the this newspaper a more …complete place.

Also, if you haven’t noticed, I don’t know how to write introductions.

Ok, so this month I still don’t have any new games, but I'll promise next review will actually be about a new game! In the meantime, I'll give you a really popular game, Grand Theft Auto IV and its first expansion, The Lost and Damned. So I’ll put a disclaimer right now, if you’re under the age of 10 you really shouldn’t want to play this game. If you're above 10, go ahead. 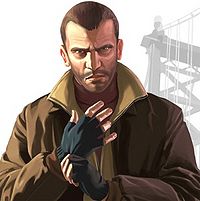 You play as Niko Bellic, who has a really crappy life. He also snarks a lot.

With that out of the way, let's start with the story, which I must say is one of the finest aspects of the game. The game stars (and you play as) Niko Bellic, an immigrant fresh of the boat who has decided to move to New Y-I mean, Liberty City because of its reputation as the land of liberty. Of course, as you would expect, he quickly gets into Liberty City's criminal underworld, and so you play his tale of how he survived in the city.

But, who the hell plays Grand Theft Auto for the story? The game itself is what matters in a sandbox game, and while it isn't bad per se, Grand Theft Auto IV's gameplay is certainly dated. No, I don't mean the “shoot everyone up” part; I mean all the other parts. Apart from doing missions, you don't have jackshit to do in this immense world. Sure, you could hang out with an AI buddy, but that mostly amounts to “drive here, play a boring minigame, drive back”. You could watch TV, but that’s just depressing man. And in this gritty and realistic universe, you just can’t go into a murder spree because it just isn't detatched enough from reality in order from it to be funny.

And then there are the controls. I challenge you to find an AAA-game with more horrible controls in almost everything, because it's kind of impossible. Cars and motorcycles control like they are made out of paper, a single crash will make you go flying like 30 meters in the air, which you’ll be doing a lot of times, since trying to stop the goddamn vehicle is also a hassle that involves you pressing all the buttons on the controller while praying to whatever deity you worship to please not let you crash into that same fucking wall another time.

*sigh* Moving on, walking is something you’ll most likely never want to do, since it's slow as fuck, and running is now apparently an Herculean task since it involves mashing the X/A button as hard as you can. This, coupled with the horrible and boring as hell driving, leaves taking a taxi as your only option for traveling everywhere, and even though you can unlock a free taxi for you to do anywhere without paying, you'll notice taking a taxi will make a hole in your wallet, especially in the early game when you don’t have much to start with.

The shooting controls, while somewhat awkward, are actually the part of the game that I wish most sandbox games took influence from. You get an auto-targeting reticule that automatically goes for the nearest living object, which, in the brown world of Liberty City, is a necessity since enemies will most likely blend in with the background. It also shows their health, and let’s you score headshots easily, making combat

The city is one of the best aspects of the game, filled with detail and easter eggs, just like in other GTA games.

Moving onto the sandbox, the world of Liberty City is a beautiful place, and a gaming masterpiece as far as environments is concerned. Every single piece of it is perfectly detailed, and it shows that Rockstar tried really hard to make it its own world, with people having random conversations in one corner, or two hobos having a drunken fight in a closed back alley which you have no reason to be in. It truly feels like this isn’t a world just designed for your player character, but that the player is just a part of it, with other people having their own adventures.

However, the part that truly shines in the game, the best part of it, is the sound department. First off, the voice acting in the game is flawless, well, maybe not that good, but it's still really good. But the reason I said that the sound department is the best is simply because of the radio. The radio, which you can listen while driving, is made up of about 12 stations, each with their own DJ and own music setlist. There are also 3 talk radio stations, one of which is unlocked about 5/8ths of the game and is hosted by the guy who wrote all of them, Lazlow.

Now, some of you may be thinking, while preparing their pitchforks, “I’m tired of all this, I already have Grand Theft Auto IV, I just want to know if The Lost and Damned is worth it”. Truth is, until this point, I totally forgot I was also going to review it, but don’t worry, let's dedicate the rest of this review to that thing.

For those who don't know, there's this thing called downloadable content, which HD consoles like the Xbox 360 can do. They're basically digital things you can buy to extend your game's playtime, like expansion packs, but more crappy. So, when at the beginning of this console generation, people weren't still so hot on the whole idea, Microsoft announced that they had made a deal with Rockstar so that, in exchange for gigantic amounts of money, they would create 2 DLCs for Grand Theft Auto IV only for Xbox. And the first one, and the one people consider the inferior of the two, was The Lost and Damned. This one focuses on The Lost MC, a biker gang that you occasionally meet in the main game. You play as Johnny Klebitz, the vice president of the gang who is having issues with the newly released president of the club, who’s being a complete idiot starting gang wars and just overall not giving a shit. In terms of gameplay, the DLC doesn’t add too much. It gives you a few new weapons, and improved bike racing, but there’s not a lot compared to the core game. But the story is more interesting on this one, showing us the story from the point of view from someone who isn't new to Liberty City and already has his reputation made.

Overall, I would recommend Grand Theft Auto IV to anyone wanting some gritty, realistic action with a great plot, but not someone searching for the mindless, stupid fun of past games (go to Saints Row 2 if you want that, you won't regret it). On the other hand, The Lost and Damned should only be purchased if you're a big GTA4 fan, since it doesn’t add too much to the mix, apart from more rage-worthy motorcycle driving.

And that concludes this review, I guess. Seeya next month, when I’ll hopefully review Mass Effect 3.