Oh hey, everybody, it’s Toad85 again. I apologize if this section seems a little short this month, but I’m drenched in homework and it’s difficult to find time to write. Also, I had some trouble finding a good source for this edition, so that cut into my time as well.

But look at the bright side. I finally figured out how to put pictures in this thing.

This adds some color to my article. Or not.

So sit back and watch me do my thing the best I can.

So, where did we leave off? Well, if you don’t know, read the title of the dang section.

The year is 1967. Nintendo has dabbled in some industries outside of its original intended market, which was card-making. A newcomer named Gunpei Yokoi (remember that name, it will appear again) had joined the staff, and was coming up with these newfangled things called toys. His goal was to develop a hit toy that Nintendo could sell over the holidays. He was one of many toymakers hired by Nintendo at the time, but unlike his comrades, his first prototype was completed in wood. 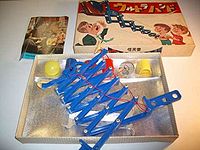 Yokoi’s toy was called the “Ultra Hand.” Basically, it was an extendable appendage thingy that you could use to pick things up or poke another person with, kinda like a robot arm. Nintendo decided to take a shot with it. It turned out to be a success, ultimately selling 1.2 million of them. Yokoi was named head of Nintendo’s toy division as a result, and began work on his next big product.

His next toy was a simple resistance meter marketed as a love tester. Two people who were in love would hold a handle each and then hold each other’s hands; the amount of resistance would indicate how much the two were “in love.” This toy also sold well, and would help propel Nintendo into their next era.

Yokoi, Masayuki Uemura (a member of Nintendo’s R&D team), and Hiroshi Yamauchi (remember him from issue 59?), as a team came up with a new use for old bowling alleys, that had fallen into disuse after a bowling craze in Japan in the sixties. They decided to make an electronic skeet-shooting gallery. Despite having some technical limitations, the three engineers developed the system in 1974, basically making a system that would register a “hit” to a target whenever someone pulled the trigger on a toy gun.

Nintendo had just made their first video game. 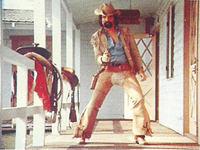 The system was called Wild Gunman, and was based on a wild-west high-noon duel scenario. The game featured live-action video of a homicidal outlaw who the player would need to shoot before they themselves were shot. The game would later be ported to the NES, but the graphics were tremendously downgraded. Little did they know it at the time, but Nintendo just pointed the compass of their destiny.

In 1973, the OPEC oil crisis that was ravaging the U.S. economy also hit Japan pretty severely. Shooting galleries like ‘’Wild Gunman’’ became much less popular as the oil crisis went on, and Nintendo was looking for some new novelty to keep the company afloat. Luckily, it found salvation in the form of Pong.

Hiroshi learned about the video game craze going on in the U.S. during the 70s, with companies like Atari racking in millions of sales and billions of dollars. Nintendo decided to jump in the pool, and negotiated a license with Magnavox to produce their electronics in Japan. In 1977, Nintendo released the Video 7 Color TV Game, a console for the Japanese market, and, together with its sister console the Video 15, sold over one million units. Nintendo was about to make it big in the video game industry, but how long would it take for the corporation to catch on across the pond?