’Twas the night before Christmas,
And all through the house,
Not a creature was stirring
Not even a mous...er??? 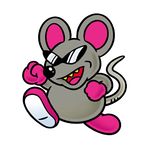 This guy aint no sugarplum!

Hey everybody! Marioguy1 here for another issue of Fading into Obscurity, with a pretty big character from the past of the Mario series for this Christmas issue, Mouser!

Mouser made his next appearance as King Koopa's main accomplice in the mysterious Super Mario Bros. Super Show! wherein he appeared a lot, serving as his his boss's henchman. He also made appearances in the outdated Nintendo Comics System as a species, known as "Mice". But, along with Super Mario Bros. 2, the Mario TV series and Mario comics, Mouser has mostly faded into obscurity...

Merry Christmas to all!
And to all, a good night.