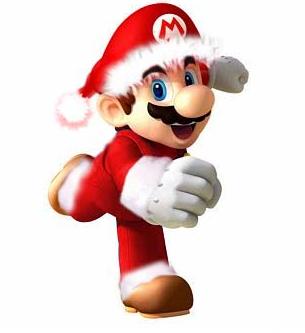 Merry Christmas, 'Shroom readers, Marwikedor here. I'd like to spin a yarn on some wonderful Christmas memories from the mid to late '90's, brought to me and millions more courtesy of Nintendo. It has been fifteen years since Nintendo released their Nintendo 64 system and changed the world as we no it for all time. And it was our favorite Italian guy in the world who was born anew. Fifteen Christmases ago (counting the one imminently approaching), I received my copy of Super Mario 64.


I was but a boy of four years then, but that didn't stop me from playing the heck out of the game. I was beyond mesmerized. It was a world starkly different from the 2D Mario adventures I had been familiar with playing, and simultaneously very much the same. My family was simply amazed by how quickly I adapted to 3D. Few in the world during that Christmas of 1996 were used to such an innovation. As I explored, I was awestruck by the world's inside the painting and collecting Power Stars to open new doors and experience new worlds. While many say that the game did not stand the test of time, I ardently disagree. One can still have loads of fun with the game.


Let's move a year to Christmas of 1997. 1997-1999's Christmas memories are the ones I thank brilliant British video game company Rareware for. In it's heyday, they were a paragon of video game-making greatness. They simply could not be touched by any other company, and I still weep recalling that dark day in 2002 when I learned they had been bought out, and they have done nothing great since. But that is another story. The game I received that year was Diddy Kong Racing. It was truly challenging to beat the entire game at that age, but I managed to do so. I grew obsessed with the character Wizpig, a great villain who had a lot of potential. Sadly, not much has been done with him since (except for a Nintendo DS remake that had him sounding like Count Dracula and not a draconian Warthog, lamentably).


And now, let's discuss Christmas of 1998. Ah, 1998. 1998 was the year that the video game world reached it's apex. And I truly profess it is the greatest year of video games. Yes, it was a time for Ocarina of Tim and 007, but let us not forget Yoshi's Story, Resident Evil 2, and, of course, Banjo-Kazooie. Ahhh, Banjo-Kazooie. Does not the mere mention of that game enliven your soul? Side-by-side with Donkey Kong Country, is it Rare's crowning achievement. From exploring those nine world's in Gruntilda's Lair, to the unforgettable creatures and characters met along the way, to collecting Jiggies, there is a wonder to that game that is inexplicable to the point where you'll just have to play it to believe it. How dreadful that it's kind has been virtually extinguished by the pernicious incursion of the FPS. Apparently, the powers that be decided this sad world wasn't big enough for the both of them. But on Christmas day itself of 1998, the year came to a marvelous close with the magical game, Glover (which I thought was Mario's glove because a classmate lied to me about it). Not another game where the player was shooting everything in sight, instead it was fun, challenging game about a wizard's glove (and a great character named Mr. Tip, the wizard's magic hat, who could somehow bilocate, or trilocate or multi-locate somehow...) who could attack enemies with crystals that he could transform in a rubber ball, as well as many others such as a bowling ball.


That brings us to Christmas of 1999, the greatest one of all. I received Donkey Kong 64. It was the first 3D Donkey Kong game, as well as the first game since Donkey Kong Country gamers actually got to play as him. It was and is another Rare masterpiece. It introduced three new Kongs: The slow, yet meek and mighty Chunky (who was the older brother of Kiddy), the old-fashioned, clownish orangutan Lanky, and Dixie's little sister, Tiny. Until the 2011 release of Batman: Arkham City, Donkey Kong 64 held the world record for most stuff to collect in a video game. Over the years, many have believed that the backtracking between levels was overambitiously played to the hilt. But I disagree once more. Especially as a kid, I was amazed by going back as new Kongs I had unlocked and having the ability to collect new Gold Bananas and the works. Oh yes, Rare and Nintendo brought another golden Christmas memory. By and large, people measure their lives by holidays: Birthdays, Easter, Halloween, Thanksgiving, but Christmas beats them all. But those Christmases when you're young, they are the sweetest of all, for they stay with you forever. Those great Christmases from the mid to late 90's, so long ago, are gone. But they will never be forgotten, for the games I and millions others still have and still play will make it impossible for us to do precisely that. The Marioverse has given me so much personally, and I wish there was someway I could thank Nintendo. Well, the thousands of dollars my parents have spent buying their games through the years are not a bad way, perhaps.