Hello fellow users, I think have been a little nonexistent for the past few, um, years, only popping out of my rock when something interesting happens or I’m bored, so I’ll start by introducing myself. My name, in case you haven’t noticed, is Xpike, and I’ve been a user here for…what? 5 years I think? I was previously the director of the Fake News on this newspaper and I used to actually edit articles.

With all that unnecessary introduction out of the way, I’ll tell you what I’m doing here. I’m gonna write a second non-Mario review each month alongside Crocodile Dippy. Now, you may ask, why? Well, there’s a variety of reasons, but I think the main one is that there can be a variety of opinions. There is also the fact that no one is getting paid for this so we don’t have unlimited budget to buy every new game that comes out, so having 2 people should make the expenses a little bit lower. Now, with all that said, let’s start the review itself, shall we?

Today I’m gonna review one of my favorite fighting games, Ultimate Marvel vs. Capcom 3, which came out last November for Playstation 3 and Xbox 360 and this January for the Playstation Vita at a budget price of 40$ because it is a re-release of Marvel vs. Capcom 3, which came out last February. The game is a fighting game in which you use teams of three made up of various Capcom and Marvel characters to duke it out in style. 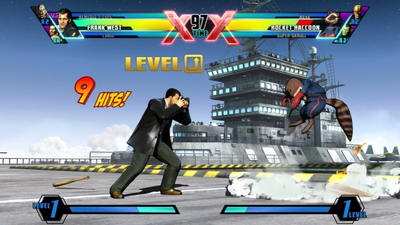 Now, just because I said the words “fighting game”, I think that most of the people closed this tab and went to play Zelda or something else, since fighting games have the bad reputation of being really complicated to play, with 7 button combinations needed to throw a kick. And that is where the popularity of the Marvel series lies in. The fighting system is really easy to pick up and play, and you can be making 50+ hit combos after 2 matches, yet the game is still deep enough to attract hardcore fighting game fans waiting for a challenge.

The plot of the game is non-existent, Dormammu fuses the Capcom and Marvel worlds together so that makes Galactus come and try to devour them or something like that.

The point of the game is a cool vs. awesome battle between your favorite Marvel and Capcom characters, including fan favorites like Deadpool, Phoenix Wright, Amaterasu, Mike “Major of Earth” Haggar, Dr. Strange and Dormammu. Now, because the game doesn’t have anything resembling a plot doesn’t mean the characters don’t have any amount of personality. Pre- and post- fight dialogues have the characters referencing past events, them reacting to fighting their friends, example: Iron Man vs. Captain America, or simple, plain insanity, like everything Deadpool says every moment he opens his mouth.

The game itself also provides you with a tiny database showing information about all 48 characters unlocked right from the start, along with their music, artwork, and sound effects. While this may sound like a great thing, the information, especially on Capcom’s side, isn’t as accurate as it could be, and it still won’t allow you to enjoy a lot of the hidden nods between characters.

The graphics of the game are gorgeous, looking like a comic book that has come to life, with every single object in the game detailed with extensive care. The stages look beautiful, with continuity nods all over the place. But enough about that, let’s focus on the fighting itself, shall we?

The fighting system is based on three main buttons: Low, which makes quick, low damaging attacks that are really easy to combo, Medium, that makes an attack with medium range and medium damage and is mostly used to combo into high attacks, and High, which are slower but powerful attacks that normally end a combo, which are always color based to that they’ll be even easier to remember. The game also has a Special, or S, button, which launches the opponent in the air for you to follow in if you hold it down, or launches the opponent to the ground if you press it in the air.

This simplified layout makes combat faster paced than other Capcom fighting games like Street Fighter, and makes the ability to do ridiculous shit like launching a player in the air, juggling him between all your teammates and then throwing him into the ground again real easy to pull off. And while it seems easy, there’s also a huge meta game in it, with each character having the ability to win a match if put into the right hands (except Hsien-Ko, poor chick).

Fights are 3-on-3 battles until all 3 characters on one player’s team are knocked out. This means that you can switch the character you are using in mid-game in order for the previous one to recover health, or call them as Assists in order for them to make a single special move to help you, adding another layer of strategy to the game and making you think up what teams have good chemistry together.

The fighting also improves on Marvel vs. Capcom 2’s cinematic, comic-style, Hyper Combos, making them faster-paced, non-spam-able, and something you can use to bring in another teammate instead of only finishing it.

For non-fighting game fans that just want to kick their friends’ asses in a party, there’s also the Simple mode, which can be selected before choosing your team. This simplifies combat ever more, making the Low button make a simple combo, the Medium button launches the opponent in the air, and the High button makes a hyper combo. The Special button lets you use a special attack without making the motion. But there are some downsides for this mode, more specifically that you can’t use more than 2 special attacks and your combo ability is severely limited.

Now, this seems like a really long list of shit to learn, but it isn’t, and you actually learn most of it in the first 5 to 10 minutes, with the in-game Mission Mode helping you choose which characters fit your gamestyle better and teaching you how to build decent combos.

I just made this sound like the best goddamn fighting game you’ve ever seen, right? Well, not everything is happy and shit. Like I said earlier, this is a re-release of a game that came out 8 months earlier, which means that Capcom may pull this shit again and release another, third, version of the same game in the future, making this one obsolete. There’s also the matter of Capcom’s nickel-and-diming, asking you to pay ridiculous prices for the downloadable content, like 4$ for each costume pack, which don’t add anything to the game, or 5$ for each new character.

There’s also the matter that the game itself is dry of content, with only a robust arcade mode in it for you to play alone, and an online mode with not much to do except play with strangers unless your friends also got the game, in which case you can also join an 8-player lobby to play. And let me tell you that playing with strangers isn’t fun, because 99% of the time it’ll be either a spammer or a guy playing with the cheapest characters in the game.

In conclusion, this is a fantastic game to pick-up and play, with great attention to detail in almost all areas. While the lack of modes can make it boring sometimes, it is still a great example of what makes fighting games fun to play. I hope you enjoyed my first review, and if you didn’t, I promise to make a better one next time because I sure didn’t know how to really write one this time.