That is because Mario & Luigi always walk in single file in the game(M in front of L), so when they land from the pipe facing the DS screen, it looks like Luigi is wearing Mario's clothes. It's not really a glitch at all, just an odd yet logical sprite of the bros in single file facing forwards.

This glitch has been annoying for me when I'm playing through this game. It is where if you go into the wrong pipe in the star panel room, sometimes it glitches, and it will never produce the blue star panel, causing you to be stuck at this point in the game.
The preceding unsigned comment was added by MarioisEpic9001 (talk).

Can the 'Too Much Damage' glitch be done in normal game-play without cheats or something? I mean can any one do this wihtout using AR codes?--

The Too Much Damage glitch is a fake. I've performed this glitch at Level 43 and used a falling star on a goombule and gave about 13000 damage. The game didn't crash.
The preceding unsigned comment was added by ‎Mattberge (talk).

Hi, I'm playing on No$GBA, and always when I reach the first Battle, Mario VS Bowser, regardless asking for help or not, I can only keep jumping on bowser, and he won't attack back. I think this is either a countermeasure or a glitch. 04:53, 26 April 2014 (EDT)

I don't believe it's a legitimate glitch. Can you replicate it? Does it occur specifically in that spot? Can other people replicate it?

While this would technically be a glitch, we can't cover it since it's exclusive to your game cartridge. 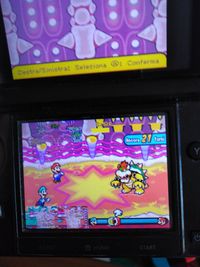 In the German version of the game, there is a fatal glitch at the Bowser X Battle. References:

(A) There isn't a Germany version of the game, but there is a general Europe one. Though the Europe version does appear in German when the console is set to that language. (B) It seems that video was taken in an (inaccurate) emulator, so it might be caused by that. It also happens on console.

What happens is... once you reach 21 turns remaining the game glitches like that in pal version.

False Information is not true[edit]

I tried doing that, but I didn't get the message. The actual message if you do so is: "At long last, the Flame Pipe! But what awaits?" If there is a version(s) where the message does say that Bowser can breathe fire, please make note of it. I have the cartridge. I also have the English (USA) version. --Yoshi the Space Station Manager (talk) 21:43, 4 August 2016 (EDT)

Since no one replied, I deleted this info.

Bowser Gets an Attack Piece[edit]

In dimble wood I discovered a Glitch:Go to the place with the wall where Bowser must climb with his skpike ball ability then fall on the plateau with the attack piece and then body Slam below the attack Block.--Red Yoshi 1.5 & Squid Sisters (talk) 09:48, 23 August 2016 (EDT)

Only if we can get one, I have an action replay so I may be able to show you using that. :)