Fungi Frenzy is a Free-for-All minigame featured in Mario Party 9.

The players run into the first field of nine panels arranged in a 3×3 grid. 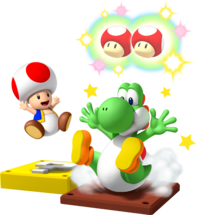 Toad and Yoshi and some panels from the minigame

Players try to earn points by ground-pounding panels with Mushrooms in them. Before each round, the panels very briefly show what they contain. Points in this game are solely based on the number of Mushrooms a player collects. Some panels contain one Mushroom, others contain two, and the rest contain three. Players can also stun each other by ground-pounding them. After each round, the players run through a gate to the next field. After three rounds, the player with the highest score wins. There is always a winner, but there can be a case where there is no loser, although this requires the sum of the Mushrooms in total to be divisible by four.