I enjoy drawing many stuff, notably about Mario universe (especially koopas and mushrooms)and I've played many Nintendo games (besides I prefer oldest games. Here is the main story I made : Toadette and Daïze

This story deals with a friendship between those two characters since they participated together to the Gand Slam . Daïze is the name of the paratroopa who taked part in MKDD’s competitions (actually he has no name so I wanted to find him one ^-^ ). 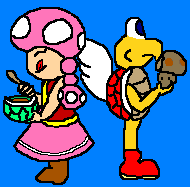 Here are the main characters : Toadette and Daïze ( the name i gived to the paratroopa who was a part on Mariokart Double Dash !!. His family name is Para.

Niko There is also Niko, Daïze's best friend, and the first koopa who participated to a competition ( Super Mariokart^^)

and other charachers... (work in progress)

Venious For the moment, he is the antagonist ^^. He totally hates all Mario ennemies and so, he sees Toadette as a traitor since she was a part with Daïze in MKDD.

Kamek He loves commanding and so he can't bear the other disobeying him. That why he hates Daïze and does everything to give him a hard time.

Nuage Toadette's best friends. She is also Venious' childhood friend (but she is now secretly in love with him ^_^ ) She is kind and calm.

Samantha Samantha is a nurse of Bowser castle, she is shy and she is secretly in love with Niko (Daize’s best friend)

Impacto It's a hammer bro. He is very proud of his race, and scornful toward paratroopas as one of his quotes says : "I don't need wings. I have my hammers! Wings are used for running away. I'm not as fearful as you ! So don't scoff at me! And stop looking down on me ! In very thruth, YOU are pitied !" 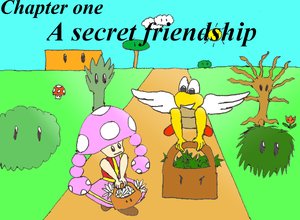