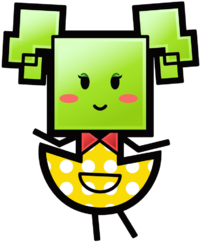 Welcome to my user page. Here I will state my reviews on games, my favorite characters, the games I'm currently playing etc.

Most times on the Super Mario Wiki, I am editing pages to make it have a better writing quality or trying to make it as accurate as possible. I also try to go on the Wiki Maintenance page and try to edit those pages and try to get them off the list. While I'm not on MarioWiki, I usually listen to my iPod or play video games.

There are many video games in the Mario Universe, so I'm just saying what video games I own.

In all, here are the Nintendo video game consoles that I currently have:

Everyone says the Nintendo DSi is light. Honestly, I can't say for myself, since I never owned a regular DS. However, I do agree with the fact that gamers will find it very easy to play some of their favorite games without having to notice it weighing down on their hands. The screen is pretty sharp and bright, without it straining anyone's eyes. However, I strongly criticize the fact that it now doesn't include a slot for Game Boy Advance games, so that was definitely a factor Nintendo shouldn't have taken out. Otherwise, I see no complaints about this amazing handheld console. This console gets a 7 out of 10.

The Nintendo Wii is definitely a great console for anyone. The controls, the Wii Remote (or Wiimote) and the Nunchuck fit in gamers' hands easily and comfortably. Even for the more retro gamers, they can also play some games for this console using the GameCube controller that plugs into the Wii Remote. The graphics on the Wii just blows my mind. The sound is nice and crisp. This console gets a 10 out of 10.

The Nintendo 3DS XL, like all other consoles, has its pros and its cons. The good aspects about this is that players now see much clearer images, as opposed to the DSi. It also has a much longer battery life, now lasting up to 6--8 hours. The only thing I can really complain about is the brightness and the 3D settings; even though the brightness on my 3DS is average, I still feel some soreness in my eyes, and it only gets worse with the 3D features on. On that note, however, I can say that the 3D feature is simply amazing; previously, the best 3D features that I knew of required special glasses. This console recieves an 8 out of 10.

New Super Mario Bros. was the very first Mario game I have ever owned--and I've been hooked on the series ever since. To me, this is one of those games you keep on playing again and again. I, for example, find myself erasing one of my files and starting a new one. Once I get 100 percent game completion, I repeat the process. This game just never gets old for me.

This served as a harder challenge for me to complete, though this game is probably one of the best platformers I have ever played. I certainly praise the game for its excellent new power-ups, such as the Propeller Mushroom and the Penguin Suit. This game also has better (and harder) Star Coin locations and secret exits. Finally, I love all the boss battles, especially the boss battles against Bowser Jr. on the airships. I especially recommend this game to anybody who is looking for a more challanging platformer game.

Mario Party 8 is a nice game if you want to pass the time, but I wouldn't say it's the most excitement-filled game out there. The Star Battle Arena can be the tiniest of a challenge, but after that, I would say there really isn't anything left to do but unlock the figurines, and that really isn't very exciting. I do like the board designs in this game, on the positive side.

This is probably my most favorite video game, and definitely the best Paper Mario game I have ever played. Even though it no longer has an RPG battle system, it still has a very diverse storyline, as well as hilarious and memorable characters. I have never gotten 100 percent completion on this game, but it is still quite a challange, and I'm looking forward to doing it.

This is a very unfair, yet fun, racing game. The fact that it is even unfair, whether your player gets hit from a blue shell, or you possibly fall off a cliff while being in 12th place, just makes it even more fun. I have never gotten 100 percent completion from this game either, but I am still trying to unlock every character, beat all the times on Time Trials, and getting three stars on each cup. (The highest I have on any cup is two stars, just so you would like to know.)

In all honesty, I find this game to be quite the challenge. At first the galaxies seem quite easy, although as you progress through the game you can find galaxies that can make you go insane trying to beat. Right now, I'm still in the process of unlocking Luigi, and although I have less and less patience trying to complete each mission, I still have lots of fun playing. I, like many people across the world, believe this to be a very good game.

From what I have played, it doesn't seem very interesting. Being relatively new to the WarioWare series, I originally thought it was going to at least have a storyline. Imagine my surprise when I discovered the truth: it was just a game containing minigames. I was looking more for an actual video game, not a game representing an arcade. Honestly, it's definitely one of my least favorite games.

Although the game starts out slow at first, it definitely doesn't hesitate in giving the player any challenges as the game progresses. Super Mario 3D Land also has memorable music and entertaining gameplay. While I admit it wasn't my favorite platformer game, that still doesn't make it a game worth buying.

When I first bought this game, I had pretty high hopes for it. After all, it would be the very first RPG I had ever played. Of course, there was still the generic battle system, but I felt disappointed that I wasn't awarded with much from defeating enemies, as there was no experience points in the game. As the game was divided into little "levels" that can be accessed via a world map, the game's areas weren't as connected, but they were still memorable areas. Despite being an RPG, which is notoriously known for its in-depth stories, Paper Mario: Sticker Star mainly sticks to the most generic of all Mario games: Peach gets kidnapped, Bowser is trying to take over the universe, and the rest is history. This is not to say that this is a terrible games by all means; it includes some of the catchiest and jazziest music I have ever heard, and the graphics give a new meaning to Paper Mario; the game consistently references the fact that virtually everything is made of cardboard, paper, and stickers. The dialogue in this game is also very comical, a good example being when Kersti accuses Mario of touching the Sticker Comet. Overall, this isn't the best game for the 3DS, but that doesn't make it a memorable game.

Game(s) I Am Currently Playing

Rosalina is such a sweet, yet mysterious character who has a very touching story. She is probably one of the most kind-hearted characters in any Mario game.

To anybody who has played Super Paper Mario, Francis is the well-known chameleon who is known for his geeky palace, speech etc. He is just an odd character who lives in the middle of a giant geeky fortress with cats for servants, but that is just what makes him so awesome.

The eighth son of Bowser, he may not be considered "evil" as much as "mischievous". His combination of a childlike innocence and a sneaky personality is a great combination with each other, so he is considered one of my favorite villains.

In Super Paper Mario, Luvbi is a Pure Heart who was transformed into a Nimbi by her "parents". This girl often speaks in a sarcastic manner, and has an attitude for a character like her. I like how she retains this as well as her formal way of speaking; it just makes every remark she says hilarious. She is probably my favorite character from this game.

Gearmos are basically robots scattered across many galaxies in Super Mario Galaxy. The annoying part is that these robots are hardcore neat-freaks; if you volunteer to blow up the trash on the Ammo Depots, and you leave even one pile of trash left if the timer runs out, the Gearmos will get really upset at you. Coincidentally, on the Purple Comet missions for Battlerock and Dreadnought Galaxy, not only will the Gearmo get upset at you if you don't get all the Purple Coins, but you will also lose a life instead of getting another chance.

This is the boss of Flopside's Pit of 100 Trials. Altogether, it has 400 HP if you add up all the HP from its four forms as the four heroes. This fight can be really tricky, since its Dark Bowser form can breathe fire, its Dark Luigi form can perform a super jump, its Dark Peach form has defense from its umbrella, and its Dark Mario form can flip into 3-D, as well as wielding a hammer. All in all, since this is a very annoying boss fight, I am not fond of this character.

That's it for now. I will be adding more things soon!