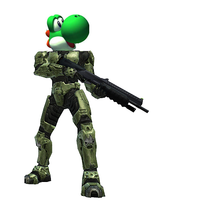 Yep another Yoshi fan in the world. I'm just a normal guy who is laid back and has an addiction to doughnuts. "Elite Yoshi" must be a strange name not heard much of, but this name has many legacies.

If I can remember that far back, I think it was the day of a Halo party. Being a fan of Nintendo and Halo, I couldn't think of a name that best fits me. First it was "Killpill" (I'll explain later on), but no. I was considered good in tight fights so Elite was the name. I thought that wasn't a good enough name so we pondered for countless hours. Eating doughnuts, drinking coffee... we thought of the name "Caffeine". Nope. Until we got bored, which took a few minutes, we decided "Elite Yoshi". Beyond that day, I was know as "... Elite Yoshi".

I don't really do anything, but I have to do something (strange):

Yep, the simple life of a kid, never time to be productive.

As I said above, I have a few nicknames:

Yep, "Killpill". In the past few years, I was a crazy suicidal manic on the loose. That's were I got the "Kill..." part. The "...pill" part was because pills used to be my favorite object to make fun of.

Now, I have a weird addiction for caffeine. I'm mostly the hyper one and always eat/drink things that have sugar or caffeine.

Yes, I eat lots of doughnuts, so much that it got me this name.

When I was very young, I had really no fun with toys, until one day, my dad got me a Super NES. Then the addiction started to begin. I kept playing the fun Mario games. Even now I can't stop playing Nintendo games. Its not my fault, blame my addiction.
-- Caff ya later, Elite Yoshi