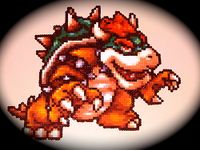 DA MASTER, NOT BOWSER. ( Secretly, its his father) Da Master's Here! I was around during the old days of Super Mario Wiki, but one fateful day, I lost my account info, so I started a new one. During the time I was gone I was on Boo Mansion Forums before it shut down and now I'm back. Good times! I still remember famous users like PaperJorge, Knife, Aipom, 3djong Dry Bowser, and even Steve, proud founder of Mario Wiki. Oh and Plumber! The first message I got after my intro on my old account was sent by him! Even in its early days Mario Wiki was still awesome. Actually I still recall reading the first ever Issue of The Shroom! I'm still glad some of the early users are still around and didn't get over "Mario Mania." Hopefully you guys all agree that for people like us, Mario is timeless. Yugioh Cards Mario RPG

I ALSO HAVE LOZ OCARINA, LINK'S AWAKENING, LINK TO THE PAST, AND ORACLE OF SEASONS. MY METROID GAMES INCLUDE THE ORIGINAL METROID, SUPER METROID, AND METROID FUSION.