Hey, users of the MarioWiki and things! For a long time, the MarioWiki has gone without an official fangame. The user Stooben Rooben and Agonizing Masterpiece Productions attempted it once - an RPG Maker game called Userpedia: Spirit Lies. This fell flat on itself due to complications.

Later, I figured out how to use Game Maker, and subsequently announced on the forums that we should all collaborate to make an awesome game featuring the users of the Super Mario Wiki and their references/internet avatars/whatever you want to call them. The categories for collaboration were (and still are) - Programmers, Writers, Composers, Spriters, and Designers. Almost all of the MarioWiki couldn't really use Game Maker, and I understand its dumb ways of doing things can turn off a lot of people. We got a lot of writers to write the script. There was one Composer and Desinger, but that person just randomly poofed away for some reason. There were two programmers including me, but the other had to resign, leaving me to program it all.

Later, I finally revealed the plot. One of our users, Smasher (talk) signed up to be a main hero, and won the poll, having the most votes. I concluded he would be the starting character in the game. So, the plot really centers around Smasher. If you go to the forums, you know Smasher has a lot of special ranks - Chat Op/Admin (I never bothered to check), Mafia Hosts Guild, Awards Committee, Core 'Shroom Staff, and most recently Global Moderator. He also has the most posts on the forum. In this game, a meteor crashes down on New Wikisburg (the city that is the center of the MarioWiki), spitting out giant amounts of dark auras, corrupting users and even entire websites. Smasher, one of the mods, is suddenly stripped of all of his ranks in his sleep, and is treated as a new user by machines. With the help of users that haven't gone insane, Smasher must travel around the internet rescuing refugees and retrieving the physical representation of his ranks - the Colored Stars.

Seems a bit wordy, but it's not too complicated. It's your normal MacGuffin excuse plot with a bit of spice added to it. I started programming it in Game Maker, and created a basic engine. Smasher could throw eggs to attack enemies. There was one enemy, a Spambot. They're literal robots that are defeated in one hit. I uploaded this short, basic engine test to YouTube, which can be seen here.

Since then, Smasher's graphics have been changed. He can now dash, talk to NPCs by pressing A or clicking on them (I literally JUST added that), and open an inventory with S. In the inventory, you can store up to five items right off the bat. More storage will be accumulated later in the game, for a total of ten items. Smasher can also collect Wikoins, which are green coins that you can collect to buy items in the shop. However, there's a twist - you can only hold up to ten at a time, and all the items are usually 1-5 Wikoins. You will later be able to deposit your Wikoins at banks in the towns.

I hope this doesn't seem too complicated. It's not that too complicated. There's also a HUD which looks nice, in my opinion. It shows your character, health, Wikoin number, and your current Key Item.

You may wonder, what does this all look like? Well, here's a batch of screenshots: 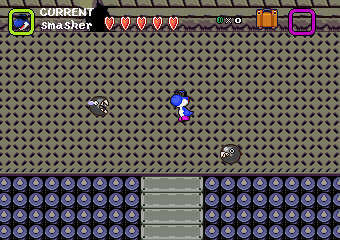 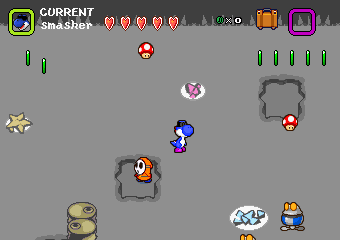 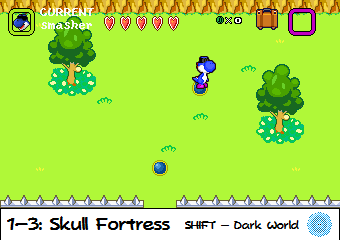 Oh yeah, an unexplained World Map. You may see that there are Star Coins and the...other thing I'll explain later into development.

This World Map is mouse-controlled. Click on the level to move Smasher, and press Z to enter the level. Use Up and Down to move the camera. Currently, there are two levels leading to a dead-end first room of each, and another leads to a debug room.

Hopefully this section has left you with a feeling of "Wow! How can I help?". Well, you can either sign up to be in the game as an NPC, or sign up to be a Composer or Spriter. Composers will compose exclusive MIDIs for the game, while Spriters make the game's sprites. If you wish to sign up or have any questions, PM me on the Super Mario Boards or ask on my talk page! I would prefer it if you had a forum account, though.

See you! Oh yeah, and one more thing - Want to keep in touch with this game's progress? Or just want to read about it more? Check out its forum thread or Userpedia page! See you guys soon!