Hello everyone! If you haven’t noticed already, this month’s ’Shroom is the 50th issue. Therefore, to make Music & Artwork extra special, every section in it is filled in, even if no particular user has been hired for the writing position! So, take a look at all of the sections and enjoy!

Hope you enjoy the 50th issue!

Character Artwork of the Month (Fawfulfury65) 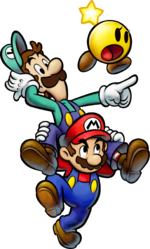 This month’s Character Artwork is a picture of Mario, Luigi, and Starlow during the events of Mario & Luigi: Bowser’s Inside Story. In this artwork, Luigi is mounted on Mario’s back, while Starlow is apparently startled at something. Ever since I first saw this artwork, I’ve liked it quite a lot. It has a cool art style and the characters are drawn exceptionally well. It seems to be extremely difficult to draw. I also like how colorful it is and how well shaded the characters are. The file is also very high quality and pretty big. This is definitely a great artwork for this month’s issue!

Boxart of the Month (Fawfulfury65)

This month’s Box-Art of the Month is from the North American version of the Super Nintendo Entertainment System game, Donkey Kong Country 3: Dixie Kong’s Double Trouble! As the game’s name suggests, it is the third game in the Donkey Kong Country series, which features Dixie Kong and her little cousin, Kiddy Kong, who both go on an adventure across the Northern Kremisphere. These two characters can be seen in the very front of the box-art, alongside a few enemies, a Banana Bird, and Funky Kong. Not only are a handful of characters on this fantastic box-art, but there is also a lot of detail and colors. You can see a few of the areas from the game on it too, such as a Brothers Bear cabin and Funky’s Rentals. Additionally, the picture is very big and high-quality. To sum everything up, this box-art is absolutely fantastic and is very fitting for such a great game.

This month’s Sketch Related to Mario will now feature several drawings from a variety of users. If you would like your drawing to appear in the next issue, send it to me in a PM! 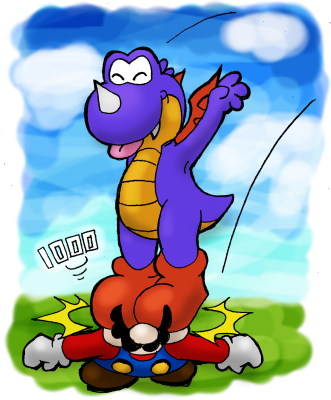 Artwork 2 by: Chivi-chivik (talk)
This is a Super Paper Mario related sketch. It shows Mario, Luigi, Peach and Bowser looking and talking about the Trial Stew.

Artwork 3 by: MST3K (talk)
Here’s a little something I doodled a while back.

Welcome back to the ’Shroom’s Screenshot of the Month, with your host, Fawfulfury65! Since this month’s ’Shroom is issue L, I decided to pick an image with Luigi in it. This picture displays the mustached sidekick hero standing on a grassy planet during the events of Super Mario Galaxy 2. In the background, one can see a canopy and large amounts of sunlight that pass through it. The sunlight makes the image very flashy and cool. Along with these several neat aspects of the image, it is also very high in quality and big. Well, that’s about it. Tune it next month for another great Screenshot of the Month!

Soundtrack of the Month (Fawfulfury65)


For the 50th issue of the ’Shroom, I chose a piece of music from the recent Nintendo DS game, Mario vs. Donkey Kong: Mini-Land Mayhem! This is one of my favorite video game themes, which plays in the final world of the game. I find it to be very unique compared to the other themes in Mini Land Mayhem!, as it is a little slower and uses a lot of band instruments. I especially like the sound of the brass instrument (I’m assuming it’s a tuba or another low brass instrument) in the background that plays the bass part. It is a very exciting piece of music and fits the setting perfectly.

For the ’Shroom’s 50th issue, I thought it would be good to go back in time to an era where 8-bit gaming was the latest technology… Here’s Super Mario from Super Mario Bros. 3.

Sometimes it might seem that Mario’s gone so far forward from where he once was, but it’s always good to see a classic picture of him.

Now, for the 50th issue of the ’Shroom, I present you the best of Super Mario music, with an impression of the old traditional Japanese/ Chinese music style! Here are six wonderful, master-rendered pieces!


We all know it, we all love it. This is one of the Mario ‘classics’, it perfectly reflects the glory and majesty of the Chinese Empire! Just take your time, listen to it carefully and dive into the most intense feelings of nostalgia!


One of my favourite levels in Wario Land: Shake it! I just love the percussion that goes along with the melody. It becomes more intense as it progresses. Don’t you feel some kind of sadness and melancholy, yet related to strength and joy?


I just love this board. This kind of music just makes you cheerful and gives you the resolve to climb up that mountain.


Yet an another great oriental-themed song. You must feel the harmony, the peace, the calmness of the music.

This music plays while you are facing and fighting the 100 sammer guys. You never get bored when listening to it, yet you are glad when you have finished the trail.

I hope you enjoyed this article. (:

Photoshopped Image of the Month (Edofenrir) 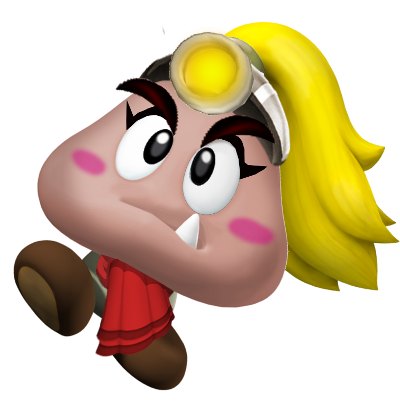 Hey there, everyone. This is Edofenrir, and I will be supplying May’s Photoshopped Image of the Month. Although I have to admit, the title is somewhat of a misnomer; I don’t own Photoshop, so I used The GIMP instead, which works out just as well.

Pictured above is Goombella, a major character from my favorite Mario game ever, Paper Mario: The Thousand-Year Door. She is one of my favorite characters from that game and the proof that Goombas do not always have to be pushovers. Respect the Goombas, or else… well, Goombella’s Tattle Log knows where you live…

I used normal Goomba artwork from New Super Mario Bros. as the base for my image. Then I recolored some parts, and added some things from other images as well to compose a Goombella. The final image is composed of a Goomba, and parts of Mario, Spooky Speedster, FLUDD, Princess Peach, and Princess Daisy. All in all it ended up being a pretty crazy mixture.

And I guess that is all I have to offer. Thank you for the attention.

Welcome to Issue L’s Random Image of the Month! This is a screenshot of Daisy from the Nintendo 64 game Mario Tennis. Daisy was one of the five Technique style characters. Waluigi, one of the other Technique players, made his first appearance in the game.

Well, that was kinda underwhelming. I was hoping I’d come up with a better image but that’s what I got. I guess all that’s left to say is that the first 50 issues have been great, and I’m sure the next 50 will as well! Keep on ’Shroomin’! (Oh, cool. That word started and ended with apostrophes.)