I see you did mention the error at one point, but it was removed. Based on the edit summary, I'm assuming it was fixed in a later version of the game. But even if this is the case, I still think you should make note of the error, possibly in a trivia section. I can provide a picture of the tattle if you just need proof of the error (though my capture card is of low quality). 123JamesHeart 20:44, 29 May 2013 (EDT) 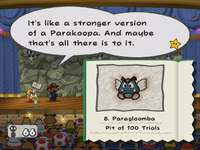 I see someone went ahead and added the tattle mess-up since I made the above post. Since it was reverted, I have uploaded the image and am bumping this. I'll see about finding a YouTube video of the tattle later tonight, in case you don't trust this image. 123JamesHeart 14:48, 26 October 2013 (EDT)