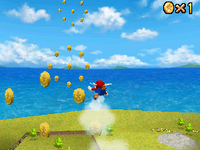 Several rings of coins with single coins in the center.

The types of coin spawners appearing in Super Mario 64.

However, there are some objects that do respawn, such as the stone bridges in Whomp's Fortress. Normally, when Mario runs across the bridge, the stone platforms fall down and plummet to the ground, breaking upon impact. They respawn seconds later for Mario to sprint across them again[1].