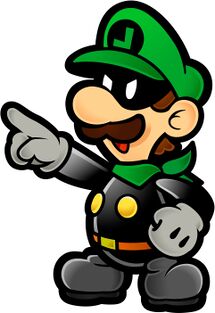 Greetings and salutations! I am -Mr. L-! Die-hard Luigi and gaming fan. I edit most major gaming Wiki's, but am more active on Nintendo ones. To make a long story short, because I'm sure y'all don't really care much for my personal life, I've played video games to unwind for almost 18 years now. My first system was a SNES when I was 6 years old. I prefer RPG's, Platformers, and Action/Adventure although I'll play pretty much any genre, the one exception to that is FPS's. I hate them. If you really want to know why? Ask me, because my problems with them shouldn't tarnish my beautiful Bio.

I have played almost all major Mario games, however, I want to review just my favorites.

Super Mario 64- Since I was 6, the only Mario I could imagine was in 2-d. The day SM64 came out, I raced to the store like a mad man, bought the game, and popped in into my N64, what happened thereafter was one of the most memorable moments in my gaming career. The levels, the vastness of the worlds, the castle, the plumber, all flawlessly translated to 3-d. A fine piece of work.

Super Mario RPG, Paper Mario, PM:TYD, Super Paper Mario- My favorite spin-off the series. One of my favorite RPG's, not only for it's charming visuals, its lovable cast of characters, and it's battle system, but also because it was able to capture the magic of Mario while still having some "epic" moments. Super Mario RPG was my first RPG to play, and a pleasure to play it still.

Super Mario Sunshine- While it didn't re-invent the franchise and was often ridiculed for it's use of F.L.U.D.D., I found Sunshine to be a fantastic game to play again and again, and was proud to make it a part of my library of Mario games. Let it be known, I liked Sunshine!

Super Mario Galaxy- Ah. Now here we are. Be prepared for a long review. Fans will notice that the gap between the Gamecube Mario games and the Wii one was rather large. So much in fact that other series were starting overshadow the plumber franchise. Big name like Halo, Gears of War, Call of Duty, Zelda even, all we're coming out with bigger and better games, while little Mario was stuck with his Gamecube hits. I for one admit denouncing my Nintendo fan-boyism, and turning to the X-Box and PS3 for new games. I only truly bought a Wii for the Virtual Console, and Brawl. The day Mario Galaxy came out I was already regarding my shiny new Wii with a wary eye. Rather a waste of money I thought. Nonetheless, I drove out to my local Gamestop, and bought Galaxy. the very second I hit a sling star in Good Egg, I almost burst into tears of joy. The music coupled with the image of Mario flying through space with such beautiful definition and color and my wave of nastalgia was almost all too much, right there, on the TV, was the reason I loved Nintendo like no other company. That was why, after 24 years, I still loved Nintendo. After that moment, I don't think I ever regretted buying my Wii. Nintendo. I applaud you. And if you read all of that, I applaud you too.

Currently Active on the Following Wiki's