Sadly this isn't released in Japan.

If anyone could find pictures of the inside of this comins i owuld love it!

On Yoshi Art.com you can find a few pages of the 19th issue as well as the complete second Mario vs. Wario comic and another Japanese comic book for Yoshi's Island, which both don't have an article yet. --Grandy02 14:38, 30 June 2007 (EDT)

Feel free to make them. Plumber

I really want to see the Paper Mario and Paper Mario: The Thousand-Year Door ones really bad.

I've seen some issues on sale at eBay and Amazon; they're not translated or anything though. -- Sir Grodus

Yeah, that actually caught my attention too. They probably should be removed.(even though not many here can read Japanese) Marcelagus (T • C • E) I already have the books! :o

Been myself who upload that stuff, I read somewhere (Don't ask me where please) if you can't get the original in your country, you can download it with no problems. And, since you can't get this manga outside Japan and this is a North American Page, it's not illegal. Far I'm concerned. If you believe is still illegal anyway, no problems from this side (And, anyway, I asked before do it and I receive a positive response to the idea... oh well...) - --GinnyN 10:00, 4 September 2008 (EDT)

The problem with this article[edit]

The real problem with this article is that it speaks little of the insides of the comics, mainly just discussing what's on the front cover. I'm guessing at least a good portion of this articles' content comes from one's speculation (although I want to try buying the books soon) rather than many people who own them. Anyone who's actually read these much should contribute more of THEIR information. http://www.mariowiki.com/images/8/87/Crystalbamonsig.png [[Crystal Batamon]] 15:20, 11 November 2008 (EST)

It's true what you say, but the article is like that because of obvious reasons you pointed out. Garlic Man, one of the very few users who owns the books (and who speaks fluent Japanese, too), told that he will work on this article. But he doesn't seem to have time right now (he also hasn't added Super Mario-Kun information to Doopliss' article so far, which is required for FA status). --Grandy02 15:29, 11 November 2008 (EST)

Apparently there IS a Super Mario RPG comic, since I just found a page from it: 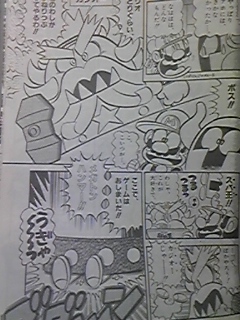 buuut, this is all I can find of it (also I found it completely on accident on a japanese Mario fan's page).
The preceding unsigned comment was added by Will work for frog coins (talk).

How weird, I did too O_o I was just about to put it up here! So I guess we ought to remove the thing about no Super Mario RPG? (Or maybe it was just a side-story, who knows.) 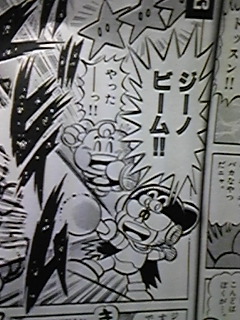 I dunno if it's old or if he's going back to do it because of Virtual Console and the lack of major Mario releases lately. Plus, it was posted on a Japanese person's blog just in March of this year. I have no idea, but I'll report back when more information comes! Leirin 15:34, 5 April 2009 (EDT)

19 and 20 are based on Yoshi Story I found a torrent for vol.1-20 awhile back(EDT)
The preceding unsigned comment was added by Arith (talk).

The problem with this article is it constantly says "comic book" and "issues" even though these are MANGA VOLUMES, not issues/comic books. I changed a few of the "comic books" into "manga volumes" but if more people could do some that would be great. -Leety

I posted the link for the raws so more info on the Super Mario-kun article can be added.

Google Translate has given us a vague idea of the actual arcs. Yes, there is a SMRPG one! Just go to japanese wikipedia and get google translate to translate (rather badly) the Super Mario-kun page. it's a little hard to find it but it's there. :D -leetdoom

Hello everyone! It's Johnny Mind here. I've just translated the Monstar scene of Super Mario-Kun. If it's okay, I'm willing to translate all the others scenes on the Wiki and the Manga itself in the future.

No, someone reverted it.

Thanks a lot! I really appreciate translations of the Super Mario-Kun. My sister and own several volumes of it and it's really hard to appreciate it when the only thing that can be read are the pictures.

Well, there is an entire category of comic scenes of stuff we uploaded, so, we will highly appreciate it if you translate any of these images.

Hey guys, this is Embyr from Metroid Wiki. I'm in Japan right now and just discovered the Super Mario Kun series at a local second-hand book store (they're hilarious and perfect for my level of Japanese comprehension), and I'd like to contribute to this page as I read through the ones I've purchased. Since there's a lot of potential for expansion, I wanted to ask about a preferred page layout. Should we keep everything in a table and keep the descriptions very short? Or is a more detailed plot summary more desirable? Embyr 75 (talk) 07:03, 17 August 2014 (EDT)

For this page it'd probably be better for keeping the summaries short, however, if you want to you could probably create a page for the volumes and put a more detailed plot summary in there. Yoshi876 (talk)

Sounds like a good option. I don't think I'm autoconfirmed yet, though, so I'll probably just leave a note here with the volume number when I'm ready and have one of you guys create it. Embyr 75 (talk) 08:33, 17 August 2014 (EDT)

You'll be autoconfirmed in a few days, don't worry about it. Yoshi876 (talk)

I know where to get some volumes, and am willing to help create articles for the individual articles. --Ultimate Luigi (talk) 23:01, 4 July 2015 (EDT)

I'm not sure why there's a hyphen there as I'm as fluent in Japanese as I am in Farsi, but I think it serves a purpose that I'm not too sure of.

Japanese honorifics normally have hyphens when translated (in this case, スーパーマリオくん to Super Mario-kun). However, Mario Maker has it as SUPER MARIO KUN, rather than Super Mario-kun. PikaSamus (talk) 12:46, 28 March 2016 (EDT)

Well something about it doesn't sit right with me when the name is in all caps. It sounds more like a game file name than anything and it's something I don't really take seriously when it comes to naming objects.

Yeah I know it's in standard case but the source of the name is in all caps. I mean, I'm not necessarily opposed to moving to the variation in Mario Maker but I'm not necessarily supporting this move either as that's the translation of the characters.

I don't think it should be moved. Super Mario-Kun is the official name, after all.

Well, it is a very minor thing that don't change anything at all, but I think the correct romanization for くん is "kun" with the "k" not capitalized.In japanese titles are translated/romanized using lowercase letters, since they aren't part of the person's name, but actually a honorific.

Agreed, honorifics aren't supposed to be capitalized. When honorifics like -san or -chan are used, they're written in lower caps, and the same holds true for -kun. It should be corrected. Ericss (talk) 21:11, 22 February 2018 (EST)

You all should see this (it's in Japanese thou): https://www.youtube.com/watch?v=YvqvnH5gmdM Should we mention this?
The preceding unsigned comment was added by 93.217.83.172 (talk).

There is one made by Yukio Sawada, based on Yoshi's New Island. Is it an out-of-series? -- 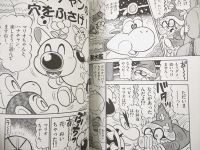 Wait, do we cover that series? Are there other Super Mario-Kun spinoffs we should be aware about?

Should we have pages about other volumes (and scans btw) since the volume 19 has a page? --

Given that it has an official spelling through a game, should it be renamed? --

Pretty sure the actual title of the manga takes priority over what it was called in Mario Maker. TheDarkStar

If that were true, we'd be calling it スーパーマリオくん instead of Super Mario-Kun, so I'd just remove the hyphen since all caps seems to be a stylistic choice. LinkTheLefty (talk) 12:21, July 23, 2019 (EDT)
My suggestion would be to remove the hyphen and the another language template, but maybe treat the ALL CAPS as a stylization. LinkTheLefty (talk) 08:08, November 14, 2019 (EST)