I think we should organize the sections, as in the games that Iggy is in in order from SMB3 to NSMBW, then the other medea under the games, then the extra stuff stayes at the bottom. Maybe we can do that with the rest of the Koopalings. Nihaho13 21:31, 17 October 2009 (EDT)

Iggy (the Koopaling) is a different character then Iggy, Bowser's cousin from the Super Mario Bros. Movie. It's pretty obvious. Although some of you may say "But they have the same name", that may be true, but look at other examples. We keep the information of Yoshi, the character, in a different page then Yoshi (species), the same goes for Toad and Toad (species) and others. We already have a disambiguation page, allowing one to reach either the Koopaling or the cousin, so their is no point in having the latter shown on this page, as it already has a page of it's own.

We acknowledge that they're mainly different characters by giving them different articles, however there is no denying their connection. That is why we include a bare bones section on the film in this article as well, with the Main template linking to Iggy (film character), where the bulk of the information is held. This was agreed upon by multiple users during a proposal held some time ago - I'd provide a link, but the Proposal archives crash my computer... - Walkazo 23:45, 4 July 2010 (UTC)

It's rather clear that in New Super Mario Bros. Wii, most if not all the original Koopalings are shown to have a significant increase in height. However I was always under the impression that Iggy Koopa was the tallest of the Koopalings, mostly based upon observations I made upon the official Super Mario Bros. 3 Artwork, as well as the comparison in height of the Koopalings sprites in Mario & Luigi: Superstar Saga, as well as the unused sprites in Super Princess Peach. I was wondering if anyone else had noticed these or not. Notice while the sprites are inconsistent in Mario & Luigi, Iggy however remains the tallest. in this I am not counting their hair. 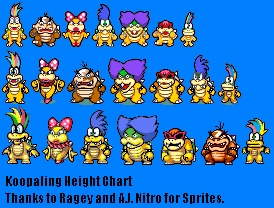 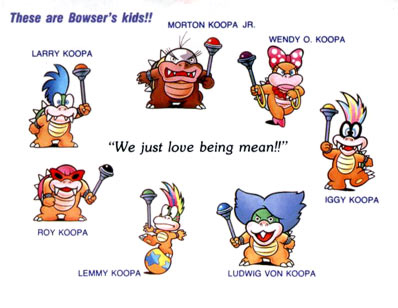 can somebody tell me
The preceding unsigned comment was added by Raushad (talk).

Not true, they're acctually swirls and it is a common gag in japanesse media that characters have swirls in they're glassses Iggy Koopa777 (talk) 8:59PM August, 19, 2014.

Larry's are also blue in addition to Wendy's, so, it would be reasonable to think Iggy's are too. I always though they were blue like Larry and Wendy's but look like swirls because of his glasses.
The preceding unsigned comment was added by Ladysweettart (talk).

I actually added the part of the article that explores this interesting aspect more in detail. In the group artwork of Super Mario Bros. 3 they indeed look like swirls, because when he closes his eyes, the circles remain: 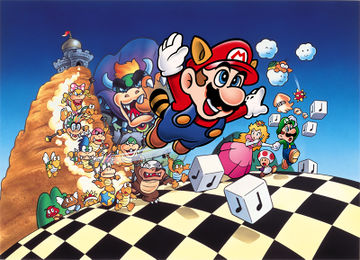 However, the actual swirls are shown in Super Mario World: 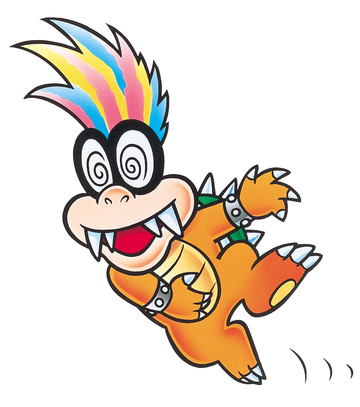 You can see how they are different from the light blue circles, shown in this other artwork for the game:

Now, in the modern games, when Iggy closes his eyes, the light blue circles completely disappear, if those were just a reflection of the pupil, something would still be shown even with the eyes closed, but it isn't: 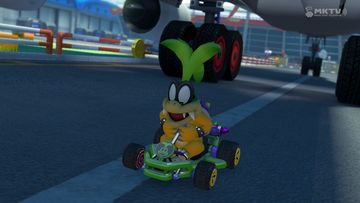 Paper Mario: Color Splash also is an interesting case, you can see the circles also in this game: 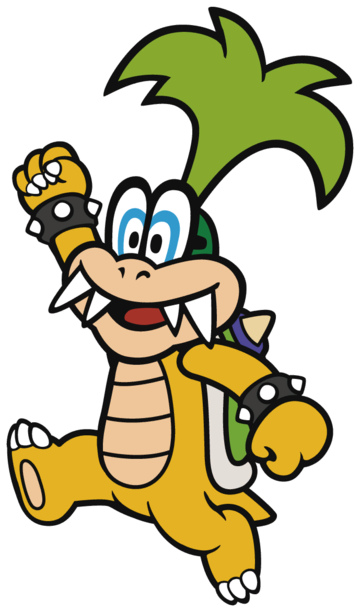 Since the paper characters notoriously almost always have no irises, one might speculate that they originate from the glasses, however there is another case of colored circular irises in the same game: 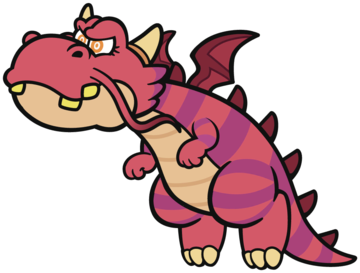 Since Draggadon doesn't wear glasses, paper characters can indeed have colored circular irises; furthermore, the light blue circles are covered by the eyelids and disappear when he closes his eyes: 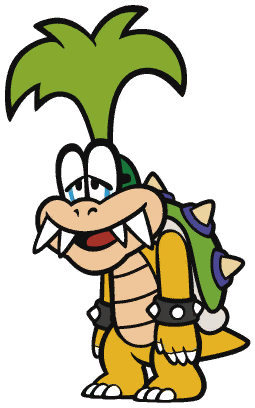 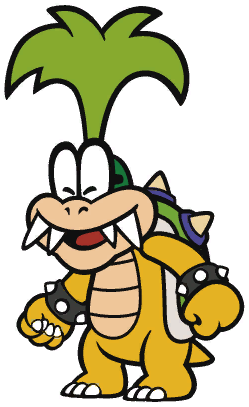 Nothing implies that Iggy has a Napoleon Complex. That makes even less sense when you realize that he's the tallest of the Koopalings. DonnyKD (talk) 21:35, 7 November 2012 (EST)

I added that in because he twice held control of a region that had the populace experiencing giantism, and of which he was comparatively small. Usually, that would be grounds for a Napoleon Complex, which is trying to control larger things in order to compensate for being short. Weedle McHairybug (talk) 22:02, 7 November 2012 (EST)

The main problem isn't that it doesn't make sense, it's that it's pure speculation: our articles are for facts, not analysis and conjecture, and I removed the Napoleon complex stuff, as well as a few other reachy statements. - Walkazo 19:05, 9 November 2012 (EST)

A link titled #1 Iggy's Castle leads exactly to the same page. This should be fixed, I don't know how.

How to unlock in mk8?[edit]

ive gotten the gold cup on all of the 50cc races and the mushroom one on 100cc and i havent unlocked him yet. does anyone know how to?
The preceding unsigned comment was added by Moschops (talk).

In Mario Kart 8 all of the unlocks are random. You'll get him after beating a random cup in first place. Yoshi876 (talk)

Good Evening, I have a problem, we not stop to cancel my modification, however, is to my knowledge... ----

I think you should do two things: rephrasing it so it is more in line with the style of the page, then, most importantly, citing the source clearly, because "Nintendo" is not enough. Mister Wu (talk) 17:38, 26 March 2015 (EDT)

As he confirmed on his Youtube channel, Mike Vaughn hasn't voiced Iggy in Mario Kart 8. The voices clips from this game is clearly don't belongs to him as he said.

If you have infos about who's actually voiced Iggy in that Mario Kart title, I would be satisfied.

Can we have a source for this?--

You can search Mike Vaughn in Youtube and you'll see his conversations in discussion. I can show one line he said which confirm that he didn't voiced Iggy. I show him the voices clips of Iggy Koopa and he said this "Well guys, I'm happy to confirm that the voice according to the website you shared for Iggy is in fact, NOT me! Whooo Hoooo!" But after he claims that the voice clips of Ludwig in Mario Kart 8 was his own voice which is completely false since it's truly David J. Goldfarb who voiced him. So Mike Vaughn has probably checking the wrong file in the website I gave or it was for provoking and then disrespect David J. Goldfarb's performance. You can comparing between the Bombing bastards trailer and Ludwig voiceclips from MK8 and you can see that it's truly David Goldfarb who did Ludwig in Mario Kart 8 http://www.davidgoldfarb.com/

In fact, you say that Mike Vaughn say he voice Ludwig and not Iggy is not a good source. Unless we look for a really good source that explain that he don't voice Iggy and Ludwig in Mario Kart 8. Perhaps he meant the opposite, He voice Iggy and not Ludwig.--

No what I meant is that Mike Vaughn didn't voiced Iggy and Ludwig in Mario Kart 8. He really confirmed it, while being sarcastic and offensive.The conversation between me, some people and him seems to no longer exist in Youtube, but what I can also say is that Mike Vaugh said atrocities towards Nintendo, and still whining that the company has sometimes reused his voiceclips in their games...

Could someone find a source citing or illustrating the "special moves" (punching and pressing a button in a remote) that should appear in Mario & Luigi RPG (Japanese version of Mario & Luigi: Superstar Saga)? In the videos I've seen so far he only uses the same moves of the international version.Mister Wu (talk) 20:43, 8 May 2015 (EDT)

Are Iggy and Lemmy still twins?[edit]

Thanks to Miyamoto's retcon, the Koopalings we once knew are a mystery and "no longer bowser's kids". Since they had a re-design, and Iggy is now taller, are Iggy and Lemmy still twins? From SMB3 onwards they were pretty clearly twins. Does this still stand?

I'll repeat what I stated in the Lemmy page: they have never been stated to be twins in the games, only in the DIC cartoons! In the games they had similar hairstyle, but this doesn't mean that they were twins. By the way, Iggy was since the beginning taller than Lemmy, see the first official illustration and Mario & Luigi: Superstar Saga sprites!--Mister Wu (talk) 06:12, 29 March 2016 (EDT)

Continuing with the series of transcriptions of the bios from the 30th anniversary books with tentative translation aided by online translators that surely needs help, it's now the turn of Iggy, called 「イギー」 in those books.

Characters' pages bio
クッパ七人衆のひとり。性格はちよっとお調子者。
One of the Koopalings. Has a frivolous personality.


Super Mario Memorial Book
クッパに仕える7人の力メ族のひとり。大きな黒縁メガネと4本の牙がトレードマーク。
One member of the clan of seven people that forms a force that serves Bowser. Big black-rimmed glasses and 4 fangs are his trademark.


Here there are 2 problems: 「性格はちよっとお調子者」 is very difficult to translate, as 「性格」 is personality, 「お調子者」 is "frivolous" (more often translated with luck-pusher), but I cannot really understand the rest. The second, 「クッパに仕える7人の力メ族のひとり」, is vital as this might be the first time we see Japanese material with the definition of the Koopalings in the "current" story. The 「力メ族」 part in particular is intriguing, and I really would like to know what does it means, since 「力」 is force and 「族」 is clan, tribe, group, maybe even family!--Mister Wu (talk) 21:34, 14 April 2016 (EDT)

Sorry for that, I just forgot it was Turtle Tribe! Anyway, Should we translate as "One member of seven people of the Turtle Tribe that serve Bowser"?--Mister Wu (talk) 06:12, 16 April 2016 (EDT)

Something like that, but "One of the seven Turtle Tribe members who serve Bowser" sounds a bit better imo.
Also, that general bio from Encyclopedia. 「ちょっと」 chotto can mean "little", so it would more directly translate into "Has a little frivolous personality". SmokedChili (Talk) (Thoughts) 09:19, 16 April 2016 (EDT)

What do we know about Iggy in Paper Mario: Color Splash? We should have that info on this article. The reason I am not doing it is because I don't know the actual speach of Iggy in that game which I think should be included (just like Morton Koopa Jr.)

You can view the important parts of the battle with him here, including many of his lines. Maybe the description about how he talks can be omitted.--Mister Wu (talk) 18:29, 7 September 2016 (EDT)

I suggest that information should be included that if the player has both the Bone and Bone Replica cards in their hand and uses one early, would Iggy still use the Big Thwomp to defeat Mario? Of course, he says, "Did you think it was over? That you could win just like that?" then laughs, and comes back after the player attacks, saying, "Now, unless if you brought two of those things, I'll just go ahead and END THIS! Lights out, Mario!" It's too late for me to try because I already beat him. User:296lmn20 (User talk:296lmn20)

We actually have footage of what happens when a Replica is used in a boss battle instead of the proper Thing. Basically, the Koopaling counterattacks and says something to you about not using Replica Cards. It should be tried, because we are largely missing those lines of dialogue.--Mister Wu (talk) 22:26, 21 October 2016 (EDT)