Marios are identical mustachioed human race who love to play with each other, or any Nintendo characters including the real Mario. They first appear in the upcoming game called Mario's Mirror Mania, where he is divided into eight of them with many colors.

A Mario's best feature is his moustache, which keeps him cute and playful. While playing with him, you'll pull his moustache, stretch it back and let it go to drive him nuts. Just like Mario, his species use to jump, run, slide and kick their way. They probably hug and take care of each other while they have white gloves, along with their color. Marios also have eyes, these are related to Mario's. He himself has blue, and the others' have different colored, except for the others in Super Smash Bros Brawl. 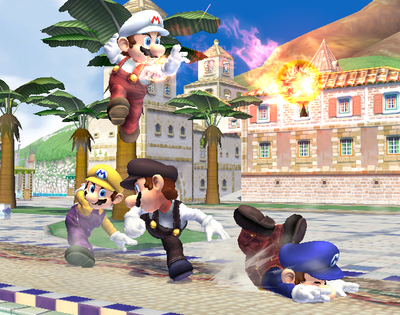 The color of their hat and shirt can be anything, even black and white. They can change their color by grabbing a fireflower, and yet their colors are related to Yoshis or the Neopets from the Neopets website. In the Super Smash Bros series, a player changes one of a Mario's five or six colors when they chose him. In the upcoming game Mario's Mirror Mania, Marios had abilities depending on their color and Mirror Mushrooms. If a Pink Mario gets a Mirror Mushroom, it could hurl love-hearts at foes. If a Green Mario gets a Mirror Mushroom, it could use earthquake. Their overalls' color is in conjuction with their clothes, except their pair of brown shoes; a red Mario has blue overalls, a blue Mario has pink overalls, ect.

(Yep, this is an evolution of the Double Cherry. I heard that E. Gadd mistakenly puts a Double Cherry in his machine, give it to Mario and BOOM. Tsunami (talk))