Beezos are a sub-species of Shy Guys that first appear in Super Mario Bros. 2. These types of species appear to have tridents armed as weapons. In addition to their physical appearance, they also have wings on their back; capable of flying.

Beezos attack by flying towards Mario or one of his friends using their pitchfork and then get within contact towards the character. They normally appear in packs as they proceed to attack the character that was played by the player. Beezos in packs endlessly appear on the screen; they won’t leave the character alone until the character leaves the current level the player is currently playing in.

An illustration of a yellow Beezo.

To defeat them, there are two methods of basic defeating. The players can use the Vegetables that appeared growing in the ground or other throwable objects and throw it to one of them. Sadly, more and more Beezos will endlessly arrive by proceeding to attack the character. Another method is by first simply jumping on one of them, pick up the unit that the character is standing on and can throw it towards another Beezo.

Beezos reappear in Super Mario Advance, as the same attack methods exist being used. During gameplay, if the player defeats a single Beezo, the player acquires 4000 points total.

A similar species called a Shy Away appears in Super Mario RPG: Legend of the Seven Stars.

Appearances In Other Media[edit] 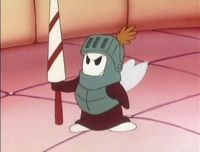 A Beezo, dressed up as a knight, from The Super Mario Bros Super Show!