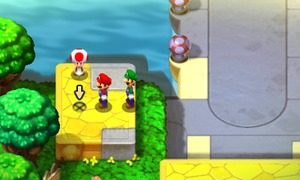 Toad in the Toad Town, telling Mario and Luigi to dig underground on the spot, so he can explain their purpose. 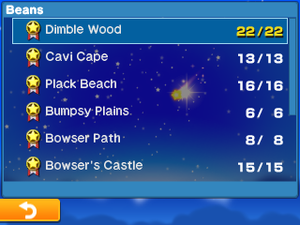 The star menu listing all the beans the player has collected.

In Mario & Luigi: Bowser's Inside Story + Bowser Jr.'s Journey, Mario and Luigi can collect Beans from beanholes – X-shaped symbols underground in Bowser's body and X-shaped bean spots on the ground of the overworld – by using Drill Bros. and jumping out at the spots. There are 144 beans in total. Like in the original, the Tunnel, Tower of Yikk, Project K, the underwater section of Blubble Lake, and all of Bowser's body (besides Energy Hold and Airway) do not have any beanholes at all.

Unlike the previous remake, the beanholes in this remake are quite different in the number of ways: Multiple beans can be obtained from one beanhole, various beanholes are removed or changed, ones obtained from Kuzzle or the PR Toad are not counted in-game, so they are not included here, some beans are now obtained after the giant battles, but are also not counted, Toad Town Caves and Toad Town are listed as the same area in-game, types of beans are changed due to the additional beans added in later titles, and uncovering the beanhole in Toad Town which is accompanied with an explaination of beanholes by a Toad will cause areas with beanholes that have not been uncovered to be marked on the map.